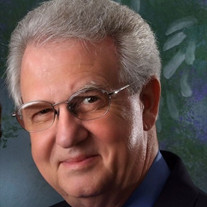 Joseph Ables, 75, passed away on January 4, 2022, in Newnan, GA. He was born on August 27, 1946, in College Park, Fulton County, GA, to the late Joseph Clyde Ables and Margaret Williams Ables Bishop. Joseph graduated from Forest Park High School in 1964 and joined the Navy in September 1964. He served on the USS Affray MSO-511 and on the USS Cone DD866. After receiving an honorable discharge, he started his career as a Law Enforcement Officer and went on to work for several agencies including the Coweta County Sheriff's Office where he retired in October of 2013 after 25 years of service and was called back to work in 2019 by Sheriff Lenn Wood to work at the Justice Center. Joe loved his job and loved working. Joe married Gina Mathews on May 25, 1988, in Hapeville, GA. They enjoyed traveling together. He was the love of her life as she was his. Joe enjoyed playing golf, teaching, and playing bass for the church, but he was best known for his love for the Lord and singing gospel music. He sang several years solo and in 1999, Gina joined him to form the duet. They were voted Music City Gospel Showcase Favorite Duet in 2003. He had three songs to chart in the US and one to chart in Europe. He also enjoyed being co-director alongside his wife for the 50+ Ministry at Mills Chapel Baptist Church. Joe is survived by his wife, Gina Ables of Newnan; his daughter Melinda Ables Bush (Michael) of Macon, GA; brothers, Kenneth Thompson (Bonnie) of Jackson, GA, David Ables (Denise) of The Villages, FL, Patrick Bishop of Jacksonville, GA; sisters, Mary Thompson of Pensacola, FL, Debbie Pittman of Aragon, GA; two grandchildren, Lauren LaTour (Keith) of Macon, GA, and James Perkins, serving in the US Army; and two great-grandchildren, Landon LaTour and London LaTour. Along with his parents, Joe is preceded in death by his brothers, Lawrence Ables, Clyde Jr. Ables, and Morris Ables; and sisters, Evelyn Wilson, Catherine Lancaster, and Doris Ables. The service for Joseph Ables will be held on Saturday, January 15, 2022, at 2:00 PM at Mills Chapel Baptist Church in Newnan, GA with Pastor Jeff Smith, and Pastor Danny Wilson officiating. The family will receive friends from 12:00 PM until service time at the church. Interment will follow at Southview Cemetery in Moreland, GA. In lieu of flowers, memorial donations can be made in Joesph's name to the Parkinson's Foundation, 200 SE 1st Street, Suite 800, Miami, FL 33131 or online at https://www.parkinson.org/, or Michael J Fox Parkinson's Foundation, P.O. Box 5014, Hagerstown, MD 21741-5014 or online at https://www.michaeljfox.org/. Condolences may be expressed online at www.mckoon.com McKoon Funeral Home & Crematory (770) 253-4580

The family of Joseph E. Ables created this Life Tributes page to make it easy to share your memories.

Send flowers to the Ables family.