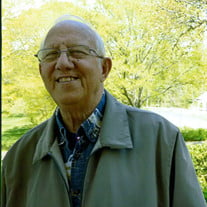 Mr. Joseph "Joe" Denson Hayes, 76, of Senoia, GA, passed away peacefully at his home on Thursday, November 4, 2021. He was born October 13, 1945 in Starr's Mill to the late Jesse Denson Hayes and Alma Jones Hayes. In addition to his parents, he was preceded in death by his sisters Francis Hayes Grubbs, Dorothy Hayes Byrom, Linda Hayes Banks, Helen Hayes Satterwhite and Cheryl Hayes Freeburg, and his brother Tony Carlton Hayes. Joe moved to Senoia, GA in his young adult years (i.e. when he had hair), where he served as a police officer on the Senoia Police Force, was a member of the Senoia volunteer fire department, and was manager of one of Senoia's Little League Baseball teams. He loved spending time (and eating) with friends and family; cooking (and eating) BBQ and Brunswick Stew every May for the annual Hayes family reunion, along with fishing, camping and traveling with his wife. He was very sociable and enjoyed spending time (and eating) with many retirement groups to which he belonged, including NGO (Never Grow Old), Senior Friends, and Citizens of Georgia Power. His work history included Southern Mills in Senoia, Zayre's in Forest Park, AmWare in Forest Park and Cooper Lighting in Peachtree City from which he retired in 2011. The visitation will be Sunday, November 7, 2021 between 6:00 PM and 8:00 PM at McKoon Funeral Home, 38 Jackson Street, Newnan, GA. Funeral services will be held in the Chapel of McKoon Funeral Home on Monday, November 8, 2021 at 2:00 PM. Following services, burial will be at the Senoia City Cemetery in Senoia, GA. Condolences can be expressed online at www.mckoon.com. For those who are unable to attend the service for Joe, it will be live webcast on McKoon Funeral Home's web page. Joe is survived by his wife of 56 years Sheilda Neill Hayes of Senoia; daughter June Hayes of Marietta GA and her husband Daniel; his sister Jeanette Hayes McKnight of Senoia, along with multiple nieces and nephews and great-nieces and great-nephews. His smile, sense of humor and laughter will be greatly missed along with his recipes for BBQ and Brunswick Stew. McKoon Funeral Home & Crematory (770) 253-4580

Mr. Joseph "Joe" Denson Hayes, 76, of Senoia, GA, passed away peacefully at his home on Thursday, November 4, 2021. He was born October 13, 1945 in Starr's Mill to the late Jesse Denson Hayes and Alma Jones Hayes. In addition to his parents,... View Obituary & Service Information

The family of Joseph "Joe" Hayes created this Life Tributes page to make it easy to share your memories.

Send flowers to the Hayes family.