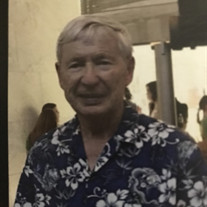 Joseph Bruce Jackson Mr. Joseph Bruce Jackson, 74 of Newnan, GA passed away peacefully on Wednesday, June 23, 2021. He was born April 2, 1947 in Newnan, the son of the late J.C. Jackson & Iona McDonald Jackson. Bruce grew up in Newnan and graduated from Western High School in 1965. After high school, he joined the U.S. Navy where he honorably served until 1970. After his service in the Navy, Bruce pursued many passions. On May 8, 1981 he married Terri Ann Wilson of Carrollton, GA after chasing her for six years. He was a person who loved to learn and loved to help others. He was a licensed electrician, did beautiful rock work, was a geologist, raised Texas Longhorn cattle with his brother Darrell and their father. He had a 30 year career with Georgia Power/Southern Company. In addition to his parents, he is preceded in death by his brother, Darrell Jackson. Survivors include wife, Terri Ann Wilson Jackson; son & daughter-in-law, Brent and Abby Jackson of Holly Springs, GA; daughter & son-in-law, Leigh and Jeff Hammons of Friendswood, Texas; six grandchildren, Lacey and Everett Jackson, Landon, Jackson, Easton and Cannon Hammons; sisters-in-law, Donna Sue Wilson of Newnan, Nelda Jackson of Newnan; several nieces and nephews who have been there to love him and to help him in any way they could. Terri would like to thank all of their nieces, nephews, cousins, and friends, and her sister, Donna Sue for all of the love and support they have provided to her and Bruce. Terri would also like to thank Dr. Laura Moore with the VA, the staff at Piedmont Fitness Center and her and Bruce's exercise buddies, the wonderful staff at Sacred Journey Hospice and Linda McDonald for loving and taking such good care of she and Bruce for the past few months. The funeral service is Sunday, June 27, 2021 at 4 o'clock in the chapel of McKoon Funeral Home with Rev. Dave Lemon officiating. The visitation is Sunday afternoon at McKoon Funeral Home beginning at 2:00 PM. Private interment will be at Georgia National Cemetery. It was Bruce's request that everyone wear Hawaiian shirts to his funeral celebration. In lieu of flowers, memorial contributions may be made to Shady Grove Baptist Church, 1293 Sand Hill Shady Grove Road, Carrollton, GA 30116 or to the Alzheimer's Association, or to the LEWY Body Dementia Association. Condolences may be expressed online at www.mckoon.com McKoon Funeral Home & Crematory (770) 253-4580

The family of Joseph Bruce Jackson created this Life Tributes page to make it easy to share your memories.