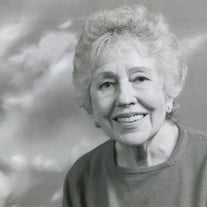 Joyce Cleveland Smith, age 93, passed away peacefully on Tuesday, October 20, 2020 at her home in Senoia, GA surrounded by family. She was born on October 8, 1927 to the late William Clarence Cleveland and Dovie Parker Cleveland. Joyce has pioneered several “firsts” over the course of her life. Mrs. Smith was the first women ever selected to a seat on the Executive Board of Georgia Textiles Personnel Association during her tenure at Southern Mills, Inc. in Senoia. To her credit she later became the first female president of the Newnan Coweta Chamber of Commerce. Joyce was honored as Grand Marshall of the Senoia Christmas Parade in 2008. Joyce was on the bowling team in high school. She remembers wearing a green and white dress uniform and bowling at an alley with four lanes. After graduation, Joyce went to Auburn University and later graduated from Draughn’s Business School in Atlanta. The Senoia beauty wed William C. Smith at Senoia Baptist Church and made her home with him in Senoia. Mrs. Smith became a stay at home mother to Skipper, Dodie, Debbie, and Nerine for many years. Over the years, Joyce spent time with good friends playing bridge. She returned to work at the age of 40 and began her 30-year career with Southern Mills, retiring as their Corporate Purchasing Manager. Joyce has served as Chairman of Senoia’s Downtown Development Authority as well as on the Board of Housing and Zoning committees. She was a member of Senoia Baptist Church for over 80 years and served on several committees. Along with her parents, Joyce is preceded in death by her husband, William "Bill" C. Smith and their son, William “Skipper” Smith. She is survived by her children, Dodie Hamrick, Debbie James and her husband William “Billy” and Nerine Barnette and her husband James "Jim". She is also survived by her grandchildren, James Hamrick and his wife Lauren, William “Chase” Hamrick, William “Clay” Brooke James and great grand daughter Halle Hamrick. She also has numerous nieces, nephews and extended family who will dearly miss her. The service to celebrate the wonderful life Joyce lived is Saturday, October 24, 2020 at 1:45 PM at the Senoia City Cemetery with Rev. Jonathan officiating. The family will receive friends Friday, October 23, 2020 from 5:00 PM until 7:00 PM at McKoon Funeral Home 38 Jackson St. Newnan, GA. McKoon Funeral Home & Crematory (770) 253-4580.

Joyce Cleveland Smith, age 93, passed away peacefully on Tuesday, October 20, 2020 at her home in Senoia, GA surrounded by family. She was born on October 8, 1927 to the late William Clarence Cleveland and Dovie Parker Cleveland. Joyce has... View Obituary & Service Information

The family of Joyce Cleveland Smith created this Life Tributes page to make it easy to share your memories.

Send flowers to the Smith family.