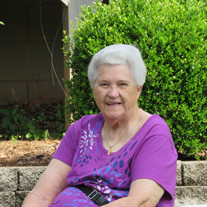 Juanita Fay Lankford, age 89, died Tuesday, April 26, 2022 at Piedmont Fayette Hospital in Fayetteville, Georgia. Born in Tunnel Hill, Georgia on January 14, 1933, she was the daughter of the late Samuel Jackson Holland and Daisy Lee Shields. Fay had a long career in retail shoe sales starting in 1969 at W. T. Grant's and ending in 1993 when she retired from Payless Shoe Source after working as a manager for more than 26 years. Upon retirement, Fay worked hard at making rocking chair memories. Volunteering was always important to her. Over her lifetime, she supported many organizations including the March of Dimes, Clayton County Golden Kiwanis, and the Senior Adult Division of Clayton County's Senior Advisory Council for Parks and Recreation. She was proud to be part of the Atlanta Olympics in 1996, volunteering to work on security detail with her Kiwanis group. Fay was very active with the Red Cross, supporting blood drives and disaster relief, including 1999 relief efforts in North Carolina after Hurricane Floyd and the 2002 Oregon fires. She was named Clayton County's Red Cross Volunteer of the Year in May 2002. Fay enjoyed attending senior centers in both Clayton and Coweta counties and monthly lunches with a group of "Gruntin' Grannies" she organized. She loved to travel with family, friends, and senior groups, visiting at least 31 states and 5 countries. Fay was a die-hard Atlanta Braves fan, watching every game on TV. An independent woman, Fay lived on her own until January when she was diagnosed with COVID-19. She spent the winter and spring months of 2022 in the hospital, rehabilitation, and was just recently moved to permanent care. In addition to her parents, Fay was preceded in death by two brothers, William Luther (W.L.) Holland and David Holland. She is survived by her children: Bonita Streetman (Randall) of Whitesburg, Georgia, Jennifer Craine (Don) of DeLand, Florida, Denise Murphy (Charles) of Manassas Park, Virginia, Michael Lankford (Cindy) of Sharpsburg, Georgia, and Vanessa Marston (Randy) of Sharpsburg, Georgia; grandchildren: Brian Streetman, Jonathan Streetman, Emily Roberts, Chris Murphy (Ashley), Kevin Murphy, Nikki Lankford, Chris Lankford (Stephanie), Kayla Marston, and Jennah MacPherson (Stevie); great-grandchildren, Brandon Streetman, Ella Moody, and Christopher Lankford; and two sisters, Barbara Holcomb and Brenda Crawford. A private family celebration will be held at a later date followed by the scattering of Fay's ashes at Daytona Beach and Biloxi, her two favorite vacation destinations. In lieu of flowers, memorial donations may be made to the Red Cross or the organization of your choice. Online condolences can be expressed at www.mckoon.com McKoon Funeral Home and Crematory 770-253-4580

The family of Juanita Fay Lankford created this Life Tributes page to make it easy to share your memories.

Send flowers to the Lankford family.