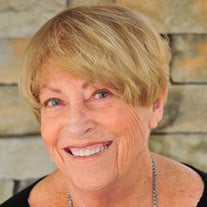 Julie Alsobrook Jones, 76, died peacefully at her home in Newnan, Georgia on April 10th, 2022 where she was surrounded by her family and friends. She was born on December 9th, 1945 to the late Sara King Alsobrook and Bryce Northen Alsobrook in LaGrange, Georgia. Shortly after Julie's birth her family moved to Newnan, where her father owned a sawmill on the east side of Coweta County in Raymond. She attended Newnan public schools through elementary and middle school and then went on to graduate from Newnan High School in 1963. Julie then made the decision to attend Converse College in Spartanburg, SC. She graduated in 1967 with a BA in English. During her time at Converse she met her future husband Carleton Allen Jones, who was a student at Wofford College in Spartanburg, SC. Later that year they were married in the First United Methodist Church in Newnan where she remained a lifelong member. While her children were growing up, she was a busy homemaker, provider and caretaker for her two children, Carleton and Sara Kathryn. In her spare time as a mother she enjoyed playing tennis, traveling and reading. Later she became a realtor at Parks and Mottola, where she thoroughly enjoyed making friends and developing relationships with her clients as well as her colleagues. She also became a full-time grandmother to her four grandchildren Parker, Kate, Bryce and Sally. She was always in the audience for every sporting event, recital, ceremony and graduation that she could possibly attend. She loved being a part of their daily lives and she loved and cared for them with her whole heart. After retirement and when her grandchildren grew older, she pursued her lifelong passion of art and excelled in watercolor painting. She enjoyed spending countless hours painting portraits of her grandchildren and family pets which she was thrilled to give to her family as gifts during Christmas. Julie is survived by her children Sara Kathryn Jones Wible and Carleton Allen Jones IV and his wife Kristi Parker Jones. Her beloved grandchildren; Parker Alsobrook Jones, Julia Katherine Jones, David Bryce Wible and Sara Blake Wible. Also Carleton (Cotty) Jones, the beloved father and grandfather and friend of Julie's. The family is grateful to her wonderful caregivers; Priscilla Williams, Augusta Cannon, Shantrella Tolbert, Laly Davis, Sharon Myster and Cynthia Walton. A graveside celebration of life will be held on Wednesday, April 13th at 2:00 at Forest Lawn Memorial 656 Roscoe Road Newnan, Ga. In lieu of flowers, memorial contributions can be made to the Newnan-Coweta Humane Society. Condolences may be expressed online at www.mckoon.com McKoon Funeral Home & Crematory (770) 253-4580

Julie Alsobrook Jones, 76, died peacefully at her home in Newnan, Georgia on April 10th, 2022 where she was surrounded by her family and friends. She was born on December 9th, 1945 to the late Sara King Alsobrook and Bryce Northen Alsobrook... View Obituary & Service Information

The family of Julie Alsobrook Jones created this Life Tributes page to make it easy to share your memories.

Julie Alsobrook Jones, 76, died peacefully at her home in Newnan,...