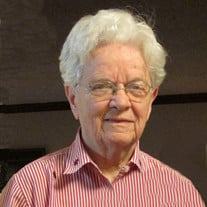 Kathleen Evans of Clarkston, Ga., passed away on March 30, 2021, after a long, dark struggle with dementia. A native of Roanoke, Ala., “Kitty” grew up in Gay, Ga., and attended Berry College, where she met the love of her life, William Ebbert Evans. Married in 1949, Kitty and Ebb spent the next 68 years together. After graduating from Berry, she worked for DeKalb County schools, teaching first at Lithonia and later at Allgood Elementary. She then earned a degree in library science and spent 22 years as the librarian at Avondale Elementary School. Upon retiring in 1989, Kitty devoted herself to her family, her church, and “playing in the dirt.” There was nothing she could not cook, nothing she could not sew, and nothing she could not grow. She is survived by her sons, David (Mary) and Danny (Lorene), two grandchildren, Alicia (Adam) and Robert (Katherine), and one great-grandson, Liam. Visitation will be from 6:00 to 8:00 p.m., Friday, April 2, at McKoon’s Funeral Home, 38 Jackson Street in Newnan, Ga. Funeral services will be at 11:00 a.m., Saturday, April 3, at Clarkston United Methodist Church, Clarkston, Ga., followed at 3:00 p.m. by a graveside ceremony at Southview Cemetery, Harris Street, in Moreland, Ga. In lieu of flowers, please honor “Miss Kitty” with donations to Berry College, P.O. Box 490069, Mount Berry, Ga. 30149-0069. Condolences may be expressed to the family online at www.mckoon.com. McKoon Funeral Home & Crematory 770-253-4580

The family of Kathleen Shivers Evans created this Life Tributes page to make it easy to share your memories.

Send flowers to the Evans family.