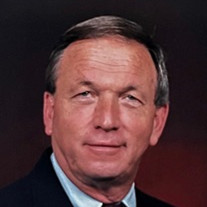 To quote a poet, "A limb has fallen from the family tree that says grieve not for me. Remember the best times, the laughter, the songs; the good life I lived while I was strong". Kenneth Lewis Wright, the older of two sons born to the late Walter L. and Dorothy V. Wright began his storied life's journey on March 20th, 1944. The next almost 78 years were consumed with as many hobbies, horses, dogs, shop tools, hiking sticks, oils, and brushes necessary to do the job well; and it's getting to be clear that here was a man who wanted to do everything, everywhere, and at top warp speed. He was always interested in current events and was an engaging conversationalist. Kenneth's education began in Newnan at Atkinson Grammar School. He would later graduate from Newnan High School, having been named The Most Talented Senior. (It was while he was in high school that some football coach laid the moniker of "Rhino" on him; not that he was particularly fast, but he was big, and fullback was a perfect position for him). As the most talented senior he had to play a piano solo for graduation. The memories of his learning to play three movements of Beethoven's "Moonlight Sonata" still haunt us to this day. His dad, being a music teacher, shifted him off to another teacher. Did I mention both were stubborn? When all was said and done, he performed the piano solo with flawless precision. That night he was also awarded The John Philip Sousa Award for his participation in band. While on a vacation trip to Daytona Beach, he struck up a conversation with a certain young lady, also from Newnan, and a student at Newnan High whom he had never met, Sandra Johnston. They were married in 1965. Having graduated from West Georgia College, he accepted a job with Allstate Financial Services. To no one's surprise, he became the youngest zone manager at Allstate in 1973. Kenneth rose to be head of all field operations for Allstate Enterprises, president of The Sears Bank and one of four people tasked to roll out The Discover Card. Being the Renaissance man that he was his pastimes were all over the board. If he latched onto something he liked it would be "Katie bar the door", because he absolutely had to be the world's authority whether it be model airplanes (more crashed than flew), taxidermy, cacti cultivation, hiking in Cade's Cove and favorite trails in the Smokey Mountains. There was even a hike in Yosemite. Add to that woodworking making fine furniture pieces for family and friends. One of his prized possessions was a bear he had killed in Wyoming. Its full-size self was absolutely the first thing you saw when coming in the door. Solicitors did not tarry once the front door was opened. For all the interests that Kenneth enjoyed, nothing became more important to him than his family. If Mike was playing a sport, he was there. When Kristi became a horsewoman, he jumped all in to be supportive. He would come to love breeding, raising, and racing thoroughbreds. At one time he exhibited an artistic side and found satisfaction in painting in the primitive style. The softer, gentler side of Kenneth made him a devoted husband to his beloved wife of 57 years, Sandra. Kenneth took great pride, and rightfully so, in the accomplishments of his children Michael Kenneth (Mike) Wright and his wife Kristen, Kristie Wright Dimarakis and her husband Nick. Kenneth felt like he had won the lottery and he doted on his grandchildren Thomas Wright, Sophia Wright, and Lucius Dimarakis. Also surviving is a brother, Lamar (and Cathy) Wright. The service of celebration to honor Kenneth's life will be on Thursday, March 17, 2022, at 2:00 PM in The Chapel at McKoon, 38 Jackson Street in Newnan. The service will be led by Reverend Matthew Sapp, pastor of Central Baptist Church. The family will receive friends beginning at 12:30 PM. Interment will be in Forest Lawn Memorial Park. While Kenneth was so proud of all the plants he had nurtured and brought to glorious bloom, he was a very thrifty and practical person. It was his request that flowers not be sent for his service in the desire that friends honor him by a gift to St. Jude Children's Research Hospital www.stjude.org. Online condolences may be expressed at www.mckoon.com. McKoon Funeral Home & Crematory (770) 253-4580.

To quote a poet, "A limb has fallen from the family tree that says grieve not for me. Remember the best times, the laughter, the songs; the good life I lived while I was strong". Kenneth Lewis Wright, the older of two sons born to the late Walter... View Obituary & Service Information

The family of Kenneth Lewis Wright created this Life Tributes page to make it easy to share your memories.

To quote a poet, &quot;A limb has fallen from the family tree that...

Send flowers to the Wright family.