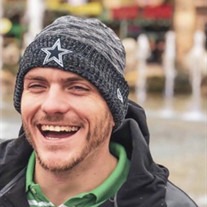 Kevin Michael Fitzpatrick, age 31, passed away Thursday, April 8, 2021. He was born in Atlanta, GA on July 21, 1989 to the Walter John Fitzpatrick and Donna Houston Fitzpatrick and a beloved younger brother to Justin. Kevin will be remembered as a loving son, father,brother and friend. He was a dedicated worker with a kind and generous soul. Kevin will be missed by all that knew him. Along with his parents, Kevin is survived by his wife Emily Fitzpatrick; children, Dakota, Kamron, Hadley; brother, Justin Fitzpatrick and his wife Angela; nephew, Hunter and niece Olivia. He is also survived by aunts, Merle Geiger, Kay Sheppard and her husband Jim; cousins, Gareth Sheppard (Alycia), Jes Sheppard (Emmi), Kelly Geiger and Keith Geiger (Sheri). Kevin is preceded in death by his grandparents; Calvin & Sue Fitzpatrick, formerly of Macon, GA. and Ray & Margie Houston of Colquitt, GA. The funeral service celebrating the life Kevin lived is Tuesday, April 13, 2021 at 2:00 PM in the chapel of McKoon Funeral Home, 38 Jackson Street, in Newnan with Pastor Steve Schneider officiating. The family will greet friends Monday evening from 6:00 PM until 8:00 PM at the funeral home. Kevin will be laid to rest on Wednesday, April 14 at 2:00 PM at Houston Cemetery in Colquitt, GA. (Miller County) The family will be setting up an education fund for Kevin’s children, so the family asks that those wishing to make a memorial contribution in Kevin’s name, do so to Justin Fitzpatrick using the venmo account @Justin-Fitzpatrick-15. Condolences may be expressed to the family online at www.mckoon.com. McKoon Funeral Home & Crematory 770-253-4580

Kevin Michael Fitzpatrick, age 31, passed away Thursday, April 8, 2021. He was born in Atlanta, GA on July 21, 1989 to the Walter John Fitzpatrick and Donna Houston Fitzpatrick and a beloved younger brother to Justin. Kevin will be remembered... View Obituary & Service Information

The family of Kevin Michael Fitzpatrick created this Life Tributes page to make it easy to share your memories.

Send flowers to the Fitzpatrick family.