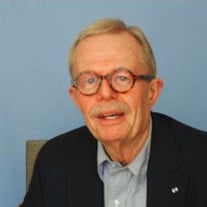 Lewis Bates Davis, Jr., the epitome of a southern gentleman, passed away after a brief illness on November 15, 2020. Lewis was born on March 31, 1938 in Rock Hill, SC to Frances Hughes Davis and Lewis Bates Davis. He spent most of his youth in Jefferson, GA, before attending the University of Georgia. After joining the U.S. Air Force, Lewis spent four years in London, England after WWII. Lewis had a profound admiration for those who served our country during this time and became an authority on the leaders and battles of WWII. Later in life, he returned to Europe for an in-depth study of the events of the invasion of Normandy. Lewis continued to study this period of our history and shared his vast wealth of knowledge with others as they prepared to travel to Normandy. He was also a proud member of the Sons of the American Revolution. Lewis enjoyed a distinguished career with AT&T in Washington, New York, and Atlanta. After his retirement, he continued service to his communities of both Atlanta and Fort Walton Beach through his tireless dedication to Glenn Memorial United Methodist Church, the arts, and Lenbrook. As a faithful member of Glenn Memorial, Lewis served as an office volunteer and Lay Minister providing care to hospitalized and homebound members. Lewis was well loved and enormously respected at Lenbrook where he was serving in the position of Residents Association President. Lewis's keen wit, gentle spirit, and undying love and devotion to his family and friends enriched the lives of everyone he knew. He is survived by his sister, Mary Davis Overton; his nephews, John Stanford Strickland, Thomas Strickland and Kaleb Carey; and his nieces Missy Strickland Hall (Chris) and Liz Hall, who are all of Newnan, GA. The family will hold services at a later date due to the Covid-19 restrictions. In lieu of flowers, donations in Lewis's memory can be made to Glenn Memorial United Methodist Church, 1660 N. Decatur Rd., Atlanta, GA 30307, Glennumc.org/give or Emory University, Candler School of Theology Fund for Excellence, 1762 Clifton Rd., Suite 1400, Atlanta, GA 30322

Lewis Bates Davis, Jr., the epitome of a southern gentleman, passed away after a brief illness on November 15, 2020. Lewis was born on March 31, 1938 in Rock Hill, SC to Frances Hughes Davis and Lewis Bates Davis. He spent most of his youth... View Obituary & Service Information

The family of Lewis Bates Davis, Jr. created this Life Tributes page to make it easy to share your memories.

Lewis Bates Davis, Jr., the epitome of a southern gentleman,...

Send flowers to the Davis family.