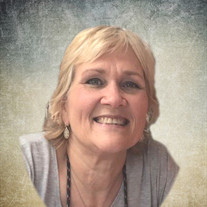 Lisa McElwaney Pike, early in her life claimed the promises of God for directing her life. “Trust in the Lord with all thine heart….He shall direct thy paths”. In the early afternoon of September 5, 2020, God fulfilled all of His promises to her and gently drew her to Him and her life everlasting. Lisa was born February 10, 1961 in Newnan GA and was the daughter of the late Emory Dan and Peggy Sue Jones McElwaney. Lisa was a secretary with the Coweta County School System. In reality, Lisa’s occupation was more of a footnote in her life story. During her early years, she was nurtured by loving parents and a large extended family of aunts and uncles who were great influences in her life. Words can only go so far in describing a person’s life of service. People who are borne of a great servant heart and spirit such as Lisa was gifted, tell their own story each and every day of their lives. To meet Lisa, one would know immediately from her smile that she was much more than just a smile on a beautiful face, but from her countenance it was evident that she radiated the love of the God she served. She saw herself as God’s foot soldier. If someone needed an encouraging word, she offered it. If a bereaved family needed help with a meal, she would go into action and help. It was almost as if she had a sixth sense for people who were struggling. She always had cards and stamps close at hand, because she realized that such a simple gesture as that was maybe just what someone needed. Lisa was blessed with a beautiful voice and delighted in sharing her musical ministry. A highlight of her life was an opportunity to sing with The Brooklyn Tabernacle Choir. A powerful force in her own life, was her reliance on communicating with God through prayer. True to her selfless spirit, she always included in her prayers, mention of others who needed to know the grace of God’s mercy. Lisa engaged life in every way, and nothing was more exciting to her than a road trip – any time and any where. She was able to strike two places off her bucket list after going to Prince Edward Island and also to Hawaii. Just as thrilling was any trip to the beach or to the mountains with her family. While serious health issues clouded the last part of her life, she faced them bravely. She had read the end of the book and knew that she, with God’s help and the love of her family and friends, ultimately win the victory. To carry on her legacy, Lisa leaves her husband of 27 years Richard Lewis “Rich” Pike, Jr. Two daughters, Leslie Pike (and Stephen) Carrier and Lyndsey Pike feel blessed that they will continue to be examples of their mother’s Christian beliefs. Also surviving is her brother, Tony McElwaney and his wife Dale. There is also an extended family of aunts, uncles and cousins in the McElwaney and Jones families. Lisa’s life will be celebrated and memories shared in a gathering on Wednesday, September 9, 2020 at McKoon Funeral Home. The family will receive friends beginning at 12:00 PM. The service to honor her life will follow at 2:00 PM in the Chapel at McKoon and will be led by Reverend Donald Yancey with remembrances by Rich Pike. Those who may wish to do so, may honor Lisa’s life by a gift in her memory to Southwest Christian Care 7225 Lester Road Union City GA 30291 or online at www.swchristiancare.org. Online condolences may be expressed at www.mckoon.com. McKoon Funeral Home and Crematory 770-253-4580.

Lisa McElwaney Pike, early in her life claimed the promises of God for directing her life. &#8220;Trust in the Lord with all thine heart&#8230;.He shall direct thy paths&#8221;. In the early afternoon of September 5, 2020, God fulfilled all... View Obituary & Service Information

The family of Lisa McElwaney Pike created this Life Tributes page to make it easy to share your memories.

Lisa McElwaney Pike, early in her life claimed the promises of...

Send flowers to the Pike family.