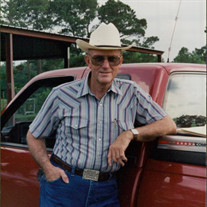 Lisle Robinson Bowers: May 1, 1930 – April 23, 2021 In the last part of his life, the nurses, who were strangers to him, remarked, “He is the real deal, isn’t he?” A well-lived life of 90 years, he was part of a dying breed of cowboy leaving an impression on anyone he met. Lisle lived with integrity, strong moral values, and determination. You could always spot him, even on a beach vacation, in his traditional cowboy hat and boots. Lisle was born on Bear Creek Road in Moreland, GA to Ralph Lee Bowers and Roxie Lucile Graves. He was born into a generation of farmers and set out to be a lifelong farmer from an early age. After graduating from Newnan High School in 1946 and ABAC in 1949, he returned home to run the family farm. In 1954, Lisle managed the Gordy Farm which later became known as LH Bar Ranch on Smokey Road for the next 25 years. As a reflection of his experience and expertise, cattle shown from the LH Bar Ranch won every major stock show in the United States except the Houston Fat Stock Show. He was a man of service who gave back to his community. He served on numerous boards including Georgia Cattleman’s Association (Vice-President), Coweta County Farm Bureau (Director), West Georgia Soil and Water Conservation (12 years), GA Charolais Cattle Association (President), and Coweta County Board of Education (21 years). Lisle was also the last charter member of the Coweta County Cattleman’s Association. Lisle would continue to manage his own dairy and cattle farm on Rockhouse Road even after he became a real estate agent in 1972 working for Parks and Mottola. Lisle’s love for Christ was evident in everything he did. His family was one of the founding families of White Oak Associate Reformed Presbyterian Church, and he became a member at the young age of 8. He would later be on numerous church committees, act as a deacon and then elder for 38 years. He was ultimately honored with the distinction of elder emeritus. He taught Sunday school for over 40 years. Lisle married Emily June McKoy at her family homeplace in Turin, GA on November 22, 1952. As a family, Lisle was its center. He loved his family with his whole heart, and leaves behind a legacy of children, grandchildren, and great grandchildren. Christmas was not complete without his famous pancakes, William’s sausage, country ham, bacon, scrambled eggs, and grits. Lisle loved the Atlanta Braves, Louis L’Amour books, sweet tea, pheasant hunting in Iowa, a beautiful day hunting quail, particularly when he was joined by his grandchildren in recent years. He loved to tell stories especially his days managing LH Bar ranch, a place he transformed into one of the leading Charolais cattle farms in the United States. He adored traveling across the United States with his family in tow showing cattle and pointing out the numerous homesteads along the way. He ultimately drove in all 50 states showing cattle and traveling with his wife. Lisle is survived by his beloved wife, June, of 69 years, his children Leslie Joy Bowers, Lilla Jan Bowers Smith, and Samuel Lisle Bowers (Dale); his grandchildren Zachary Smith (Amanda), Ethan Smith (Kirstin), Jessie Dale Bowers, and Emily Lucile Bowers; his great children Thomas Smith and Sammy Smith; his sister Betty Bowers Darden, as well as numerous nieces, nephews, and cousins. He is preceded in death by his parents, his brother, Ralph Lee Bowers, Jr, his sister Martha Bowers Guffin Reese, and two of his infant children, Laurie Jill Bowers and Lisle Robinson Bowers, Jr. He was a man of character that extended a strong handshake, respected others, gave to his community, trusted fully in the Lord, worked hard, and enjoyed a good Sunday lunch with lots of sweet tea. This was our Poppy. A man of his word. A man respected by many. A man that has left a legacy of love, honor, and an undying spirit with many stories for generations to admire and carry on. He always said, “The best thing a person can do is keep a good name.” That he did. Visitation will be Tuesday, April 27, 2021 from 6pm-8pm at McKoon Funeral Home in Newnan, Ga. Graveside services will be held Wednesday, April 28, 2021 at 1pm at White Oak ARP church on Gordon Road in Senoia, Ga. In lieu of flowers, the family requests donations to the White Oak Associate Reformed Church Building Fund, 2796 Gordon Road, Senoia, GA. 30276. Condolences may be expressed to the family online at www.mckoon.com. McKoon Funeral Home & Crematory 770-253-4580

The family of Lisle Robinson Bowers created this Life Tributes page to make it easy to share your memories.

Send flowers to the Bowers family.