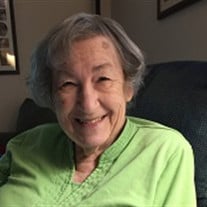 Mrs. Lois Jean Marshall Boutwell, 86, passed away Saturday, June 11, 2022, with family at her daughter's home in Newnan, Georgia, after a brief illness. She was born December 24, 1935, in Ada, Ohio, to the late Harold and Gladys Purcell Marshall. She met Ada local, the late Jack Boutwell Jr, and married, December 24, 1955, by eloping with both sets of parents present and while she was still in nursing school. Nursing students, at that time, were not allowed to be married, but she was the first nursing student permitted back in school after marriage. She had a wicked sense of humor and a good memory for genealogy. She was loved by her four children: Dennis Boutwell (Salome) of Plano, Texas; Karen Boutwell Peed (Kimball) of Newnan, Georgia; Mary Jean Reed of Ada, Ohio; and Richard Boutwell of Ada, Ohio. Her grandchildren are Kenny Reed, Tiffney Henige, Richard Boutwell, Alan Boutwell, Christopher Kimball, Peter Hua, and Ebenezer Dowuona. She had been a registered nurse for many years, and had worked in the hospital in Kenton, Ohio, until retirement. She had been a resident of Coweta County since 2012. Friends and family will hold a memorial celebration of her life on a later date and to be held in Ada, Ohio. Condolences may be expressed to the family at www.mckoon.com. Her wish was that gifts in her memory be made to The Heritage School (2093 Highway 29 North, Newnan, Georgia 30263; https://www.heritageschool.com/support-us/ways-to-give), or to the ADA High School Bulldog Athletic Fund (725 West North Avenue, Ada, Ohio 45810; https://www.ada.k12.oh.us), and either would be greatly appreciated. McKoon Funeral Home & Crematory (770) 253-4580.

Mrs. Lois Jean Marshall Boutwell, 86, passed away Saturday, June 11, 2022, with family at her daughter's home in Newnan, Georgia, after a brief illness. She was born December 24, 1935, in Ada, Ohio, to the late Harold and Gladys Purcell Marshall.... View Obituary & Service Information

The family of Lois Jean Boutwell created this Life Tributes page to make it easy to share your memories.

Send flowers to the Boutwell family.