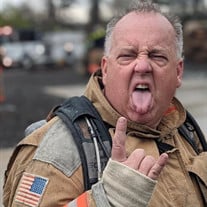 Lt. Collin Christopher Veasley passed away surrounded by friends and family on March 5, 2022. Collin is survived by his wife and accomplice of 19 years, René Barker Schoolar; children: Lauren-Ashley Patterson (Adam Patterson), Bentley Phillips (Amanda Phillips), Grant Schoolar, and Harrison Schoolar; fur-babies: Lincoln and Eisla; siblings: Florence "Flo" Sheain, Donna Sheain, Chance Thompson (Jill Thompson), Brandon Moody (Kristi Moody), Tonya Lumbert, Colonel M. "Smiley" Kaine, Steve Sherman (Tammy Robertson), Michael Hyman (Robin Hyman) and Douglas Schoolar (Giselle Schoolar), with whom he shared so much. He was born April 9, 1973 in Kansas City, Missouri, to his late mother, Christina Veasley and father, Carl Veasley. Most knew Collin from his lengthy career in Public Safety. He started as a volunteer firefighter with the City of McDonough in 1991. Collin joined the Clayton County Fire Department in 1996 and dedicated the last 25 years to serving the deranged and delinquent. His dedication to health and public safety exceeded fire departments, as he also worked as a paramedic for: Atlanta South EMS, Grady EMS, Rescue Air 1, Atlanta Medical Center, Southern Regional, Coweta and Clayton County Detention Centers, the U.S. Marshalls Southeast Regional Fugitive Task Force and Clayton County Police Department, and track safety and infield care at Atlanta Motor Speedway. He supplemented his public safety career as a dive instructor, hose holder with Precision Pressure Washing, travel agent for The BSC, pack mule, trainer and wrangler of German Shepherds, alternate husband and adult supervisor for various shenanigans among his crew. While many who knew him through the fire department referred to him as "L.T." for his rank, others knew him as Captain, a title he earned when he traded in his Harley Davidson for sailing lessons. It is rumored he had an escape plan to outrun his woman and woes but realized a motorcycle would only take him so far away. A boat was required. His time with us was too brief, but he lived and loved enough for two lifetimes and went through as many kidneys in the process. His first kidney was given by Clayton County Battalion Chief, Dennis Worsham, in 1999, and he rode it 'til the wheels fell off. His sister, Flo, gave Collin his second kidney in 2020, giving him two more years of adventure with his beloved, largely dysfunctional "framily." He will be remembered for his infectious laugh, unmatched culinary skills, love of four-letter words and mischievous mind. He encouraged us to fall, laughed inappropriately, then helped us stand back up, brush off and move forward. Those of us who experienced this with Collin moved forward confidently thereafter. We knew he would always have our back, catching us if we slipped again on our own. He passed where he lived, peacefully abreast his wife and surrounded by those most responsible for his receding hairline, gray beard and diminished patience. In accordance with his wishes, there will be a celebration of life party in place of a funeral- he did not wish for his life to be commemorated by "a bunch of sad mother [muggins], crying and [stuff]." Details regarding Veasley's Vigil will be forthcoming. Condolences may be expressed to the family at www.mckoon.com The family welcomes donations made to St. John Wildlife Rehabilitation or Donate Life www.donatelifegeorgia.org in Collin's honor as an expression of sympathy in lieu of flowers. McKoon Funeral Home & Crematory (770) 253-4580.

The family of Lt. Collin Christopher Veasley created this Life Tributes page to make it easy to share your memories.

Send flowers to the Veasley family.