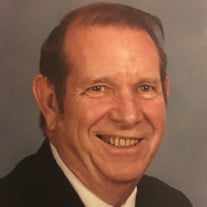 "He hath shewed thee, O man, what is good; and what doth the LORD require of thee, but to do justly, and to love mercy, and to walk humbly with thy God?" Luther Henry, "Luke" Strickland, Jr., age 92, passed away peacefully on April 13, 2022. Born in Atlanta on February 16, 1930 to the late Luther Henry Strickland, Sr. and Bertha Samons Strickland who lived in Haralson, Georgia. His dad was a farmer, and his mother was a schoolteacher. They were members of Haralson Baptist Church. Luke married Rosalind Elise Wilson on October 17, 1954. They had celebrated 51 years of marriage at the time of her death in 2006. Luke, like so many of his contemporaries, served his country during the Korean War. He was a Sergeant, marksman and received the Combat Infantry Badge and was awarded the Korean Service Medal with 3 Bronze Stars. Following his war service, he returned to Newnan and was hired by Lindsey Barron as a service man for his appliance business. As the Barrons transitioned into real estate, Luke opened his own appliance service business and kept things running for countless households in Coweta County for 35 years. Years later, he was approached by his friend, James Bennett, who was the engineering supervisor for Newnan Hospital and James offered him a job at the hospital and Luke signed on for the long haul. Following James' death, Luke assumed the engineering supervisor's position and would hold that job until his retirement. Not one to sit around during retirement, Luke decided he would let the Lord be his next boss and he immersed himself in volunteering at the First Baptist AO House, The Gideons, and The Faith Riders. He was a familiar presence in the downtown area of Newnan. For all his good works, Luke will be remembered foremost as a man devoted to his family. He is survived by his son, Hank Strickland and his wife Alicia, grandchildren, Aaron and Alaina Strickland, nieces Kathy Arrington (Greg), and Allene Strickland, nephew Jimmy Strickland, and sister-in-law Gwen Strickland. He was preceded in death by his brother James K Strickland. The memorial service for Luke Strickland will be on Saturday, April 23, 2022, at 2:00 PM at Emmanuel Baptist Church and will be led by Pastor Ben Sprenger. The family will receive friends at the church beginning at 1:00 PM. In lieu of flowers, it is suggested that memorial contributions may be made to Harvest Missions in care of Emmanuel Baptist Church 3911 Sharpsburg-McCollum Road Newnan GA 30265. Online condolences may be expressed at www.mckoon.com. McKoon Funeral Home and Crematory 770-253-4580.

"He hath shewed thee, O man, what is good; and what doth the LORD require of thee, but to do justly, and to love mercy, and to walk humbly with thy God?" Luther Henry, "Luke" Strickland, Jr., age 92, passed away peacefully on April 13, 2022.... View Obituary & Service Information

The family of Luther "Luke" Henry Strickland, Jr. created this Life Tributes page to make it easy to share your memories.

&quot;He hath shewed thee, O man, what is good; and what doth the...

Send flowers to the Strickland family.