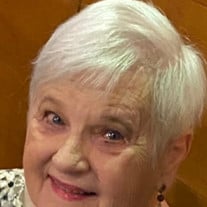 Margaret Crews Chambless, age 83, of Newnan, Georgia passed away on April 14, 2022 in Newnan, Georgia, daughter of the late Joseph Lee Crews and Margaret Crews. She passed away with a loving family by her side. She was a graduate of Newton County High School graduating with an AB degree in Elementary Education and a Master's degree in Elementary Education in 1961 from Mercer University. During her education at Mercer, she met, became engaged to and married Joseph H Chambless at the First Presbyterian Church in Covington, Georgia on September 11, 1960. Following graduation and marriage she began teaching at an Elementary School in Warner Robins, Georgia until Joe graduated from law school in 1961. Following his graduation from Mercer with an AB degree in 1959 and from the Walter F George Law School at Mercer with a law degree in 1961, Joe entered the United States Army. First living in Augusta she taught in an Elementary School. After 6 months they moved to Fort Knox, then to Charlottesville, Virginia and finally to Fort Huachuca, Arizona where she gave birth to their first child, David William Chambless on November 30, 1963. After 2 years at Fort Huachuca Joe retired from the military and they moved to Macon, Georgia in January 1964. While in Macon she gave birth to two more sons, Robert Lawson Chambless on November 8, 1966 and Kenneth Leven Chambless on May 17, 1970. When the boys reached the age where all were in elementary school she returned to the other job she also loved, teaching young children in the First Grade and in Kindergarten, until her retirement 25 years later. When she and Joe retired in Macon they moved to Newnan where all three of their sons lived in close proximity, David in Peachtree City, Robbie in Sharpsburg and Ken in Newnan all having married and were raising their own children. Peggy & Joe joined the Newnan First United Methodist Church and became members of the Henry Kitchens Sunday School class where she served as president of the class for one year. She was a delegate to the Methodist North Georgia Annual Conference for 6 years and also was a founding and proud member of the BUNCO ladies group until her passing. She is survived by her husband, Joe, and their three sons, David, Robbie and Ken, 8 grandchildren, Hannah, Rachel, Cole, Wesley, Carson Chambless, Amelia Chambless Jung, Gray and McKinley Wilbanks, as well as brother Jodie Crews of Crestview, Florida, his children Sherry Crews Barron, Cumming, Georgia, and Stacy Crews Simmons of Amelia Island, Florida, as well as two sisters-in-law, Betty Jane Meyer Roberts and Elaine Chambless Sheppard of Columbus, Georgia, their children Jeff, Steve and Paul Meyer and Bonnie Love and Mike Sheppard and two beloved daughters-in-law, Lisa Shaheen Chambless and Deecie Mann Chambless. Her funeral service will be held on April 23, 2022 at Newnan First United Methodist Church at 2 PM with the Reverend Charles Robinson officiating. A reception will be held immediately following the service in the Annex Building where the family will receive visitors. Interment will be private at the Forest Lawn Cemetery. Expressions of sympathy may be made in the form of donations to the Newnan First United Methodist Church, St. Jude Children's Research Hospital or to the charity of your choice. Condolences may be expressed online at www.mckoon.com McKoon Funeral Home & Crematory (770) 253-4580

The family of Margaret "Peggy" C. Chambless created this Life Tributes page to make it easy to share your memories.

Send flowers to the Chambless family.