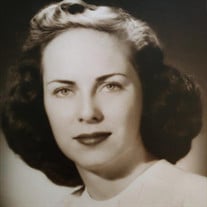 Marion Walker Murphy, beloved mother, grandmother, aunt, sister, cousin and friend, passed away on July 24, 2021 in Newnan, GA. Marion was born at 39 Jackson Street, Newnan on May 6, 1926, the only daughter of "M.J." Marion Jackson Walker and Mildred Darden Walker. She attended Newnan Public Schools and graduated from Newnan High School. She then attended Lagrange College where she was Class Representative for her Freshman class. After college Marion worked as a secretary for R.D. Cole Manufacturing Company in Newnan. After two years with R.D. Cole, Marion met JoelTaylor Murphy Sr. They were married at First Baptist Church in Newnan on June 18, 1949, and since Joel Sr was a Methodist, they became members of the First Methodist Church in Fayetteville. The couple were blessed with two sons, Joel Taylor Murphy, Jr. and Wesley Culpepper Murphy II. Marion rejoined the First Baptist Church in Newnan when she returned to her hometown. Marion worked as the switchboard operator at Papp Clinic for over 30 years. Patients instantly recognized her for her distinct and lovely Southern accent. When she turned 80 years old she decided it was time to retire. Marion was very active in many organizations in Newnan, particularly, the Newnan Pilot Club which was one of the joys of her life. Every year she and the Pilot Club members worked tirelessly at Powers Crossroads Fair where they raised money and helped many underprivileged in Coweta County. Marion was a gem in our community and she will be greatly missed by all who knew her. Her grace, charm and impeccable manners endeared her to all who met her. She is truly one of the "last of the Southern Belles". Her life was enriched by her children, her family, her friends and her church. She was a beautiful lady with a beautiful soul. She is preceded in death by her parents, her husband, Joel Taylor Murphy Sr., her son, Wesley Culpepper Murphy II and her brother, Spencer Darden Walker. She is survived by her son, Joel Taylor Murphy Jr., wife Shelley and grandson, Trevor Garner, Darden and Hannah Weiss, Joel Popham, Louise Popham, husband Patrick, John Patrick, wife Morgan and children Lillian and Wyatt. Kate Crawford and her daughters, Emily, Mary Katherine and Sarah, Susannah Wolford, husband Ray, daughter Beth, granddaughter Abigail, son Murphy, wife Lizzy and daughter Charlotte, niece Sarah Murphy and nephews Buck Murphy, Clay Culpepper Mercer, Frazier Vereen, Clay Walker and Joel Mercer and sister-in-law Marieluise Walker. Also her beloved cousins, Lila Meeks, Deanna Lawley, Kay Moore and Banks Freeman. Condolences may be expressed to the family at www.mckoon.com Marion's service will be held at McKoon Funeral Home, 38 Jackson St. Newnan, GA on Sunday August 1st, 2021 at 2 pm to be followed by a graveside service at Fayetteville City Cemetery, 262 Stonewall Ave, Fayetteville, GA. McKoon Funeral Home & Crematory (770) 253-4580.

Marion Walker Murphy, beloved mother, grandmother, aunt, sister, cousin and friend, passed away on July 24, 2021 in Newnan, GA. Marion was born at 39 Jackson Street, Newnan on May 6, 1926, the only daughter of "M.J." Marion Jackson Walker and... View Obituary & Service Information

The family of Marion Walker Murphy created this Life Tributes page to make it easy to share your memories.

Send flowers to the Murphy family.