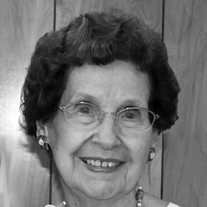 Martha Williams Gill Clark of Senoia, passed away on Tuesday, January 25, 2022, at the age of 97. She was born on September 24, 1924, in the Clover Community of Fayette County, Georgia. She worked at Liberty Mutual Insurance Company in Atlanta, Southern Mills, Inc. in Senoia as Secretary/Bookkeeper and retired as Bookkeeper from Norman W. Paschall Company Inc. in Peachtree City, Georgia after 30 years of service and 34 years for Stephens Warehouse, Inc. where she retired at age 95. She was a member of the First Baptist Church in Senoia since 1939 where she served for seventeen years as Treasurer and Financial Secretary. She taught Sunday School, Training Union, was Sunbeam Band Director, Historian, WMU Director, Youth Director, and served on various committees. She was a Brownie Scout Leader for a number of years, was a member of the Senoia Historical Society, and was an active member of the community. She was the youngest of nine children and was preceded in death by her parents, Mr. and Mrs. Johnny Williams, seven sisters, Evie Lee (Arthur) Brown, Mary (Lonnie) Byrd, Louise (Olen) Newman, Willie Mae (J.B.) Parrott, Mattie Luther (Abon) Brown, Dot (Olin) Moore, Hazel Wright, one brother, Thomas (Vera) Williams, her husband of 51 ½ years, R. Benton Gill and her husband of 3 years, David L. "Pete" Clark, her stepdaughter and husband, Beth Clark Zoffmann and Michael Zoffmann. She is survived by her daughter, Marla Gill Dugan of Carrollton, son Ben (Carolina) Gill of Raleigh, North Carolina, stepdaughter, Barbara Clark Bassett of Robbinsville, North Carolina, grandchildren, John Dugan, Thomas (Natalie) Dugan, James (Samantha) Dugan, Marissa Gill (Leon Bederman), Nichole Gill, great-grandchildren Aubrielle Dugan and Wesley Bederman, many nieces and nephews, step-grandchildren, and step great-grandchildren, and former son-in-law and good friend Tim Dugan. Visitation will be on Friday, January 28, 2022, from 5:00 p.m. to 7:00 p.m. at McKoon Funeral Home in Newnan, Georgia. The funeral service will be on Saturday, January 29, 2022, at 2:00 p.m. at First Baptist Church in Senoia, Georgia. Her body will lie in state one hour prior to the funeral. Dr. John Talley and B.J. Cobb will officiate. Music will be by Ann Watts and Ronnie & Susan Whatley. Burial will be in the Senoia City Cemetery. Martha enjoyed helping others, so in lieu of flowers, contributions may be made to: Pink Posse Cancer Fund, c/o Community Foundation of West Georgia, 807 South Park Street, Carrollton, GA 30117 OR First Baptist Church Door Restoration Fund, P.O. Box 160, Senoia, GA 30276 OR Do all the good you can, for all the people you can, while you can. Condolences may be expressed online at www.mckoon.com McKoon Funeral Home & Crematory (770) 253-4580

Martha Williams Gill Clark of Senoia, passed away on Tuesday, January 25, 2022, at the age of 97. She was born on September 24, 1924, in the Clover Community of Fayette County, Georgia. She worked at Liberty Mutual Insurance Company in Atlanta,... View Obituary & Service Information

The family of Martha Gill created this Life Tributes page to make it easy to share your memories.

Martha Williams Gill Clark of Senoia, passed away on Tuesday,...

Send flowers to the Gill family.