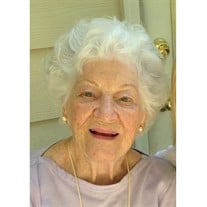 Carolyn Wilson Burson of Newnan, Georgia passed away peacefully on June 14, 2020, at the age of 95. The consummate southern lady, Mrs. Burson, known almost her entire life as Pie, was a pillar of her church, Central Baptist Church of Newnan, where she attended Sunday school since she was 3 years old and sang in the children’s choirs and the adult choir. Miss Pie was the matriarch of the Burson family and a source of strength, compassion and devotion to her family and friends. Above all she was a loving mother, grandmother, and great grandmother. Miss Pie was born January 20,1925, in Pensacola, Florida, to the late Leonard Suttle Wilson and Lura Maude Toliver, the fourth of five children. Her family moved to Newnan when she was 3 years old. After graduating from Newnan High School, she went on to attain a secretarial degree from Draughon School of Commerce in Atlanta. She worked for the Sharp-Horsey Hardware Company but left soon after to work for The War Price and Rationing Board during World War II, followed by many years at the Department of Public Welfare. She was married to Joseph Hoyt Burson in 1956 until his death in 1965. Her two daughters Lura Lee Sowa and Ginny Brown were born in 1957 and 1959. Soon after her husband’s death she returned to work at the Welfare Department. She also managed the Newnan office of Congressman John J. Flynt, followed by several years at the Social Security Administration from which she retired in 1989. She was always involved in social and community projects, a charter member of the Pilot Club as well as its President, and a volunteer at the Newnan Chapter of the American Cancer Society. All of her life Miss Pie loved to sew for herself, her children, and for many others. In her retirement she enjoyed playing bridge with her many friends, often playing all day into the evening, traveling to visit her daughter, as well as many trips with Central Baptist. She participated for many years with Feeding our Friends at CBC and teaching the three-year-old Sunday School. She was a skilled cook and would make her legendary strawberry trifle for anyone, anytime, and for any reason. Her greatest achievement was writing her book, Pie’s Half-Baked Memories, about her childhood in Newnan. No one was prouder to call Newnan home than Miss Pie. She loved her little southern town and her church more than anything. In addition to her parents and husband she is predeceased by her four siblings, Leonard Wilson (Jeanne), Virginia Holbrook (Robert), Elizabeth “Love” Cutchshaw, and W. Scott Wilson (Billie Zane). She is survived by her daughters Lura Lee Sowa (Phillip) and Ginny Brown (Tim) and six grandchildren, Spence Sowa (Jamie), Liz Coleman (Stewart) of Dallas, Texas, Kathryn Janian (Mark) of Aspen, Colorado, Lindsay Sowa of Chicago and Beth Calland (Tim) of Newnan and Tanner Brown of Chengdu, China as well as ten great grandchildren. A private family graveside service will be held at Oak Hill Cemetery. After the pandemic restrictions have been eased, a public memorial service will be held at Central Baptist Church. In lieu of flowers, those wishing to honor Miss Pie’s life may do so by making donations to Central Baptist Church,14 West Broad Street, Newnan 30263. Condolences may be expressed to the family online at www.mckoon.com. McKoon Funeral Home & Crematory (770) 253-4580

Carolyn Wilson Burson of Newnan, Georgia passed away peacefully on June 14, 2020, at the age of 95. The consummate southern lady, Mrs. Burson, known almost her entire life as Pie, was a pillar of her church, Central Baptist Church of Newnan,... View Obituary & Service Information

The family of Mary Carolyn "Pie" Wilson Burson created this Life Tributes page to make it easy to share your memories.

Send flowers to the Burson family.