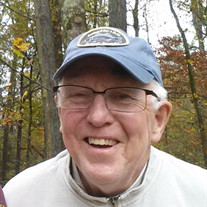 Michael T. Midas, Jr. 83, of Newnan, GA passed away Sunday, September 12, 2021. He was born April 20, 1938, in Lansford, PA to the late Michael T. Midas and Martha M. Midas (Sniscak). In addition, to his parents, he was preceded in death by his granddaughter Megan. Michael grew up in Lansford, PA, the son of a Polish coal miner. He was an only son of his loving parents. He enlisted in the Navy in 1955 upon graduating from LHS where he exceled in football, basketball and track. He attended the Naval Academy and graduated in 1960. He played on the 150# football team where he started as quarterback. He served in the U.S. Navy for 20 years where he was the captain of the USS Vreeland, home ported in Pireas, Greece. Since retiring in 1979 he has focused on improving LEADERSHIP in America. He was a Staff Vice President at the American Productivity Center in Houston, Texas from 1980 through 1982. From 1987 through 2003 Mike was Chairman of 3 TEC (The Executive Committee) Groups in Atlanta, each consisting of 12 - 14 CEO's, with a focus on enhancing the effectiveness and lives of the CEO's. He assisted the St. Louis Rams on the road to their victory Super Bowl XXXIV in 1999/2000. He dedicated his life to Music Ministry entertaining residents of the Greatest Generation in 2 Assisted Living facilities and 3 Nursing Homes. Midas is a graduate of the U.S. Naval Academy, U.S. Naval Post Graduate School (Master of Science), Salve Regina University (Master of Arts), and certified as a USN Nuclear Power Plant Operator and a Race Relations Education Specialist while in the United States Navy. Midas was selected a Chair Emeritus of Vistage, the world's leading Chief Executive Organization. Mike was a chapter leader of Act for America, South Side Atlanta, an associate of the Missionaries of the Poor, a passionate dry fly fisherman, and a member of the Cursillilo movement. He is survived by his loving wife and best catch, Agnes Midas (Skrabak); sons, Michael T. III (Liz) Midas of Denver, CO, Stephen M. (Mercedes) Midas of Chesapeake, VA, Matthew J. (Susan) Midas of Crownsville, MD, Phillip M. (Kelly) Midas of Newnan, GA; daughter Maryrose (Charles) McGeown of Portsmouth, RI; 18 grandchildren; and 4 great-grandchildren. Condolences may be expressed to the family at www.mckoon.com A funeral mass will be held Saturday, September 18, 2021 at 10:00 AM at St. George Catholic Church 771 Roscoe Rd. Newnan, GA. Interment to follow at Forest Lawn Memorial Park. There will be a Rosary held Friday, September 17, 2021 at 4:30 PM with a visitation to follow from 5:00 to 7:00 PM at McKoon Funeral Home 38 Jackson St. Newnan, GA. In lieu of flowers, donations can be made to Missionaries of the Poor P.O. Box 29893 Atlanta, GA 30359. McKoon Funeral Home & Crematory (770) 253-4580.

The family of Michael Thomas Midas, Jr. created this Life Tributes page to make it easy to share your memories.