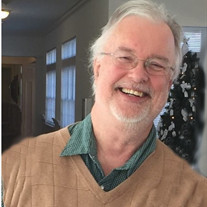 Michael Robert Twomey, age 67, of Newnan passed away on December 29, 2021 at Piedmont Newnan Hospital. Mike, or as he was affectionately known to family as 'Mick' or 'Mickey,' was born on March 29, 1954 to Brigitte (Maurer) King and the late John Edwin Twomey in Salzburg, Austria. He was raised in Wiesbaden and Mainz-Kastel, Germany where he began his life-long exploration and appreciation of various foods, cultures and music. He joined the U.S. Air Force and served as a Russian linguist flying missions at the end of the Vietnam War. He attended university on the GI Bill and received a Bachelor's of Science degree in Chemistry. He went on to serve in many capacities as a lead engineer who dealt with the chemistry of plastics and as an executive chemical engineer who worked with large manufacturing corporations. Through different employments in the 1980s, Mike found his way to Newnan where he met Nancy, the love of his life. They built a life together and raised their daughter in this city where he formed so many friendships. Mike was a charismatic and witty man who thoroughly enjoyed life and never met a stranger. Mike built a life for himself that was full of laughter, music, singing, and friends. All who knew and loved him will dearly miss him. He is survived by his wife of 35 years Nancy (Boehm) Twomey; daughter, Katie Twomey; mother, Brigitte Twomey King; siblings, John Twomey, Jr., Bruce Twomey, Brian Twomey, and Kelly (Twomey) Muller; and multiple nieces, nephews, and extended family and friends. The family will host a masked visitation on Friday, January 7, 2022, from 6:00 PM to 8:00 PM at McKoon Funeral Home, 38 Jackson Street, Newnan, GA 30263. The family will have a Celebration of Life Service and Wake at a later date to honor Mike. In lieu of flowers, the family asks that donations be made in Mike's honor to the American Cancer Society at https://donate3.cancer.org/. We ask that you share your memories of Mike and your condolences at www.mckoon.com McKoon Funeral Home and Crematory 770-253-4580.

Michael Robert Twomey, age 67, of Newnan passed away on December 29, 2021 at Piedmont Newnan Hospital. Mike, or as he was affectionately known to family as 'Mick' or 'Mickey,' was born on March 29, 1954 to Brigitte (Maurer) King and the late... View Obituary & Service Information

The family of Michael Robert Twomey created this Life Tributes page to make it easy to share your memories.

Michael Robert Twomey, age 67, of Newnan passed away on December...

Send flowers to the Twomey family.