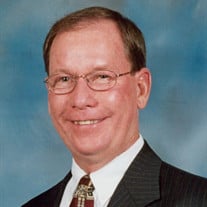 Mickey Allen Posey Mickey Allen Posey was born October 15, 1942, at home in Whitesburg, GA, the oldest of four children. Mickey peacefully died in his sleep Tuesday, November 17, 2020, from Parkinson’s complications. December 10, 2019, Mickey moved to Sanders Terrace which is located on the Wesley Woods Newnan Campus. His family thanks the staff and numerous caregivers who made Mickey’s last days on the planet Earth comfortable and enjoyable. With their compassion, patience, understanding of a disease, dedication, and attention to detail Mickey’s care was the best. Predeceased by parents John Edward Posey and Myrtle Treadwell Posey; as well as, Diane Posey, sister. He is survived by his wife of 51 years, Connie Bryant Posey. Adult children: Christopher Bryant Posey (Amanda) of Carrolton, GA, and Michael Allen Posey (Christina) of Cherry Log, GA Eight grandchildren and one great-grandchild. Survived by his sister, Juanita Snellgrove (Joe), and his brother, Jerry Posey (Melissa). Mickey started first grade at Maggie Brown School on Clark Street. He graduated from Newnan High School in 1960 and from West Georgia College in 1964. During his junior and senior years in high school he worked part time at Kroger when it was located on Greenville Street. After graduating high school, he worked full time at Kroger and attended college full time in Carrolton. He served his country by joining the National Guard November 1964 and served until November 1970. After college Mickey went to work for West Point Pepperell in Valley, AL. He realized real quick that was not the job for him. He then went to work for Sinclair Refining Company as a sales rep. Mickey loved the oil business and was able to achieve his lifelong goal of becoming a jobber when he and his business partner bought Powell Oil Co. in Austell, GA. After operating a successful Texaco and Marathon jobbership, they sold the business in 2000 and were able to retire. Upon retirement, Mickey and Connie returned to their hometown of Newnan, GA. At the time both of their mothers were living which gave them the opportunity to be close to family and childhood friends. Mickey enjoyed his retirement years by spending time at their house on Lake Wedowee fishing, boating, and water skiing. At one time Mickey bought and restored Corvettes and Volkswagens for resale. One of his favorite hobbies was riding his Harley-Davidson with other bike lovers. Watching football and playing poker were also on his list of activities he enjoyed. As long as his health would permit, Mickey exercised by walking and working out with friends at The Hunley. Mickey is a member of the First United Methodist Church of Newnan and the Henry Kitchens Sunday School Class. Mickey was diagnosed with Parkinson’s Disease in 2006. He fought the disease with dignity and determination the same way that he lived his life. He worked hard to overcome the challenges of dealing with a progressive disease. Not once did he complain or ask why me? He was pleasant and usually had a sweet smile on his face. Mickey was the person you wanted on your team because he was honest, dependable, calm, and steady as a rock. The following Bible verse sums up the life of Mickey Allen Posey: 2 Timothy 4 7-8 “I have fought the good fight, I have finished the race, I have kept the faith. Now there is in store for me the crown of righteousness, which the Lord, the righteous Judge, will award to me on that day- and not only to me, but also to all who have longed for his appearing”. Due to Covid-19 restrictions there will be no service. Please make donations to the Parkinson’s Foundation or to the Henry Kitchens Sunday School Class at First United Methodist Church, Newnan, GA. Condolences may be expressed at www.mckoon.com. McKoon Funeral Home & Crematory | 770-253-4580

The family of Mickey Allen Posey created this Life Tributes page to make it easy to share your memories.

Send flowers to the Posey family.