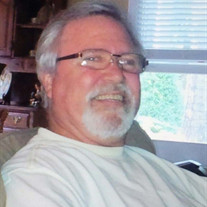 On July 25, 2021, Moses "Stanley" Toney, loving husband and devoted father, passed away peacefully in his home at the age of 76 in Newnan, Georgia. Stanley was one of seven children born to Leonard Bonner and Georgia Mildred Toney in Roanoke, Alabama on December 9, 1944. He had many fond memories and humorous stories of growing up on the farm with his siblings in Centralhatchee. He talked about the hard work they did on the farm but also the fun they had. Stanley said he wouldn't trade it for anything, creating a strong work ethic he would carry with him throughout his life. He graduated from Heard County High School in 1962 where he was voted "Wittiest" in his Senior class. Following graduation, Stanley began working at the American Can Company, later known as James River Plant in Newnan, where he continued his career for 40 years as a Cutting Machine Operator and, later, Web Press Operator. Stanley had a quick wit which endeared him to so many people, once they figured him out; he never met a stranger and was a kind soul, helping neighbors, family, and friends. His compassion for animals yielded him cats and kittens, many of which might not have made it without his help and care. He was an avid golfer and particularly admired the Augusta National Golf course after which he meticulously fashioned his own yard. This passion for landscaping became a great hobby distilled from his love of golf and acute attention to detail and cleanliness - one of many traits he imprinted onto his children which reflected his hard-working and caring nature. Stanley leaves behind his loving family to cherish his memory: his devoted wife of 31 years Jennifer Carlisle Toney; son Connor Toney and daughter-in-law Caitlin; daughter Elizabeth Toney Miller and son-in-law Todd; granddaughter Chloe Miller and great granddaughter Wisteria Miller; brother, Gene Toney and sister-in-law Jean; brother and sister-in-law Howard and Susan Shelnutt; and many nieces and nephews. Besides his parents, Stanley was preceded in death by brothers W.L., Jack, and Herman Toney as well as sisters Dorothy Raburn and June Marlow. A private family celebration of Stanley's life will be held at a future date. In lieu of flowers, donations can be made in Stanley's memory to the Coweta Humane Society, American Cancer Society, or a charity of your choice. The family would like to express heartfelt gratitude to Tanner Hospice nurses and staff Christy, Audrey, Emily, Shelly, Carlos, and Tiffany for their compassion and love during this time and also to Dr. Randall E. Pierce and his staff for their years of compassionate care. Condolences may be expressed to the family online at www.mckoon.com. McKoon Funeral Home & Crematory 770-253-4580

On July 25, 2021, Moses "Stanley" Toney, loving husband and devoted father, passed away peacefully in his home at the age of 76 in Newnan, Georgia. Stanley was one of seven children born to Leonard Bonner and Georgia Mildred Toney in Roanoke,... View Obituary & Service Information

The family of Moses Stanley Toney created this Life Tributes page to make it easy to share your memories.

Send flowers to the Toney family.