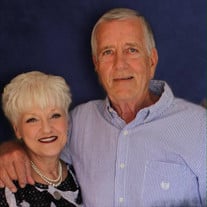 Paul H. and Nancy R. Mitchell Nancy Ruth Mitchell, age 73, passed away on August 18, 2020, and her husband of 54 years, Paul Herbert Mitchell, Jr., age 76, passed away two weeks later on September 1, 2020. They were both surrounded by their family as they left this life. The daughter of the late Isaac Henderson DeVault and Evelyn Rowell DeVault, Nancy was born April 4, 1947 in Springfield, Illinois. Paul was was born on September 5, 1943 in St. Louis, Missouri and was the son of the late Paul Herbert Mitchell, Sr. and Gainel Frey Mitchell. They both attended Southwest Missouri State College, now Missouri State University, where Nancy was a member of the Tri Sigma sorority, and Paul was a member of the Sigma Pi fraternity. It was at a party there where they met, and Paul, perhaps after a few too many drinks, saw Nancy across the room and went over, laid his head in Nancy's lap, and asked her to feed him potato chips. Whether random luck or fate, it was love at first sight, and they became inseparable. Paul and Nancy were lavaliered on November 1, 1965, engaged on March 6, 1966, and married on June 24 of that same year. Paul began his engineering career in aerospace, and in 1971, he and Nancy settled in Greenville, Alabama where Paul was the Plant Manager of Rheem Manufacturing and where they raised their two sons. Becoming “Dye-Hard” Auburn fans in their adult lives, they retired to Auburn, Alabama in 2003 to be closer to their family, where they could cheer on the Tigers and be a part of the fun during home games. War Eagle! Nancy had a vivacious personality with an infectious laugh and indomitable spirit. As a homemaker, a wife, and a mother, Nancy was devoted, caring, and tireless. She was always striving to make everything fun and memorable, whether it was your favorite meal or dessert, a personalized handmade item, decorating the house to the hilt for a holiday or birthday, or being your biggest (and loudest) fan at an event. She was also a skilled artist, and her hands were rarely still whether she was painting, cross-stitching, or using her incredible eye for showcasing and repurposing older items into new and surprising vignettes. Her home was always a warm and inviting place you enjoyed visiting, felt safe, and most-of-all, were loved. Paul was a driven professional with an unmatched work ethic and an avid tinkerer in his free time. When he wasn’t expanding Rheem’s practice and plant, he could be found in his custom-built four-car garage doing a frame-up on two classic corvettes. After he retired in his early 40’s, he started a business named “Tin and Again” where he took found objects and crafted them into pieces of furniture or works of art. He was a perpetual planner and problem-solver who believed in doing something right the first time, and he prided himself on passing his many life-lessons to his children and grandchildren. Nancy and Paul are survived by their two sons, Paul Brandon (Marilyn) Mitchell and Charles Clayton (Lisa) Mitchell, and their four grandchildren, Brennan Elizabeth Mitchell, Ryan Alexander Mitchell, Megan Olivia Mitchell, and Emory Margaret Mitchell, all of Newnan, Georgia. They are also survived by Ali (Chad) Herring, Rian (Josh) Burt, Jude Burt, Ansley Burt, and Theo Roman whom they also considered family. Due to current restrictions from COVID-19, the family will hold private remembrances. Those who wish to honor their lives with a memorial gift might consider their love of working with their hands and making a donation in their name to Drawchange, Inc at https://www.drawchange.org/donate, a non-profit organization dedicated to helping children worldwide find their innate creative spark. Condolences may be expressed online at www.mckoon.com. McKoon Funeral Home & Crematory

Paul H. and Nancy R. Mitchell Nancy Ruth Mitchell, age 73, passed away on August 18, 2020, and her husband of 54 years, Paul Herbert Mitchell, Jr., age 76, passed away two weeks later on September 1, 2020. They were both surrounded by their... View Obituary & Service Information

The family of Mr. and Mrs. Mitchell created this Life Tributes page to make it easy to share your memories.