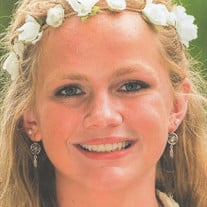 Nicole Nice, 23 years of age, passed away unexpectedly on July 26, 2021. Her parents are Dr. Patricia Nice and Mark Nice, all from Newnan, Georgia. Nicole was a life-long resident of Newnan. She was a mathematics major in her senior year at University of West Georgia. She graduated with honors from East Coweta High School in 2016. Nicole had a love of the world of mathematics and had a gift for teaching children, many which she tutored over the years. She was also a lover of animals and was an avid rescuer. Her love of animals began as a small child when she and her mother rescued homeless and abandoned animals. She had a huge heart for the abandoned and the needy which extended to the homeless people in Newnan who she would bring blankets and food, always with a Bible tucked inside. She had an ongoing library for several places including the nursing home where her grandmother resided before her death. She also set up a library in her mother's medical office where patients could check out books and bring back at future appointments. Her heart was big for just about any situation, always feeling the need to do what she could for the less fortunate. Nicole had a presence wherever she went. She was full of life and love and was quite beautiful too. She had an infectious laugh and was quite humorous. She was head strong and had no trouble expressing herself. Nicole had a strong love for Jesus Christ, and we know with certainty she is currently being held ever so gently in the palm of his hand. She is survived by her parents, and her adopted grandparents, Estelle and Malcolm Jackson of Newnan, her Aunt Laura Jones, from Fairview Heights, Illinois, her Aunt Karen and Uncle Larry, of Newnan, her beloved Uncle David Jackson, and Aunt Carrie Jones of Newnan, her two half-sisters, Katie and Megan Nice, North Dakota, aunts and uncles, several nieces and nephews from Illinois, Iowa, New Hampshire, and Texas. She also leaves many close friends, including Zachary "Sunshine" Gilliam, Newnan, Georgia, our very close family friend, Laurie Bachelor, of Palmetto, and her very good friend and neighbor, Devon Oakgrove, who was always there for her. She is preceded in death by grandmothers, Margaret Nice, of Newnan and Pat Jones, of Benton, Illinois. Nicole's life, for us, ended way too soon. She is very much missed and very much loved. We are comforted by her strong love of the Lord and her knowledge that God loved her very much.

Nicole Nice, 23 years of age, passed away unexpectedly on July 26, 2021. Her parents are Dr. Patricia Nice and Mark Nice, all from Newnan, Georgia. Nicole was a life-long resident of Newnan. She was a mathematics major in her senior year at... View Obituary & Service Information

The family of Nicole Marie Nice created this Life Tributes page to make it easy to share your memories.

Nicole Nice, 23 years of age, passed away unexpectedly on July...

Send flowers to the Nice family.