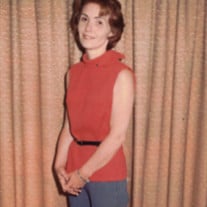 Nina Ann Haynes Merrick, of Senoia, Georgia passed away after a sudden illness on August 6, 2021 surrounded by family. Ann was born on December 7, 1938 in Margaretville, New York, the youngest of four girls. She grew up on her family's dairy farm in Dry Brook, New York, in the heart of the Catskill Mountains and graduated from Margaretville High School in 1956. Following graduation, Ann moved to New York City where she initially worked as a secretary. In 1959, she was hired by Delta Airlines as a flight attendant and subsequently relocated to Atlanta. While at Delta, she met her husband, Jack Merrick, and they married in 1962. After some time away from working to have children, she returned to Delta and retired with 30 years of loyal service. In retirement, Ann enjoyed volunteering with the Senoia Area Historical Society with events such as progressive dinners. Ann was introduced to New York Yankees baseball by her Dad and loved following the game. On October 8, 1956, she was in attendance at the historic game five of the World Series when Don Larsen pitched a perfect game, evidenced by the ticket, scorecard and program she kept that night and shared with her family years later. She was also a faithful, unwavering Braves fan, rarely missing a game. Finally, Ann had endless compassion for dogs and delighted in adopting many strays over the years who became part of her family. She is survived by her husband of 58 years, Jack, daughter, Kelley Ann Merrick of Senoia, daughter Dorcas Merrick Morris (John) of Roswell, Georgia, son, Jonathan Merrick (Kelly) of Sharpsburg, Georgia, eight grandsons, Michael, Christopher, Nicholas, Jonathan, William, Connor, Jack and Samuel as well as many friends and neighbors. Ann will be buried in Haynes Cemetery, Dry Brook, New York. Private family services have already been held. Condolences may be expressed at www.McKoon.com. In lieu of flowers, donations may be made in Ann's memory to the Newnan-Coweta Humane Society. McKoon Funeral Home & Crematory (770) 253-4580

Nina Ann Haynes Merrick, of Senoia, Georgia passed away after a sudden illness on August 6, 2021 surrounded by family. Ann was born on December 7, 1938 in Margaretville, New York, the youngest of four girls. She grew up on her family's dairy... View Obituary & Service Information

The family of Nina Ann Merrick created this Life Tributes page to make it easy to share your memories.

Nina Ann Haynes Merrick, of Senoia, Georgia passed away after...

Send flowers to the Merrick family.