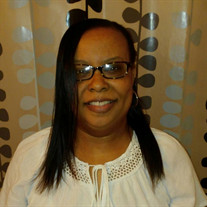 At 5:00 am on September 30, 2021, we lost our wife, mother, daughter and friend, Norma Patrice "Tricy" Slaton to mankind's greatest enemy, death. Norma was born on August 22, 1970 to Norman (deceased) and Ella M. Cheatham of Delray Beach, Florida. Norma was affectionately known as "Tricy" to family members and to anyone who became a close friend of the family. Norma was employed by Publix Supermarkets, Euro Atlantic, Krieger Financial, University of Kentucky and more recently VIP Helpdesk for Home Advisor from home. Norma got married on January 15, 1992 to Robin L. Slaton. She had one child, Trevor R. St. Martin. She was a devoted wife and mother for her entire life. Norma was baptized as one of Jehovah's Witnesses on May 22, 1993 in the Delray Beach North Congregation. She pioneered for 2 years - putting in many hours to speak to interested ones - spreading the message of Good News. Recently, because of the pandemic, she did her ministry on Zoom and reaching out by phone and letters, aiding and conducting Bible studies in the Cannongate Congregation in Newnan, Georgia. Even though she dealt with a debilitating facial illness, she still found a funny remark that would bring others to laughter. Norma loved to cook. She would make her food with Love. Always making adjustments and perfecting whatever she made. She loved all genres of music and had an extensive CD collection. Norma was very hospitable. She would help people as they were going through various trials. She was truly "Good People". Norma leaves to cherish her memories; her husband of more than 29 years, Robin L. Slaton and her son Trevor R. St. Martin both of Newnan, Ga. Her mother, Ella M. Cheatham of Delray Beach, Fl. Her grandparents, James and Emma Murray, Sr. of Delray Beach, Fl. Mother-in-law, Barbara L. Slaton (Richard L. Slaton - deceased) and her brother-in-law Brett L. Slaton both of Lexington, Ky. Uncles; James Murray Jr. (Pat) of Delray Beach, Fl. Ceaser Murray (Tammy) of Fernley, Nv. Randy Murray (Janice) of Delray Beach, Fl. Eddie Murray of Delray Beach, Fl. Chris Murray of Boynton Beach, Fl. Alvin Cheatham (Angie) of Covington, Ga. John Cheatham (Suzette) of Port St. Lucie, Fl. Grover Cheatham (Alma) of Riviera Beach, Fl. Aunts; Jeannie Homer of Wellington, Nv. Letitia "Tish" White of Delray Beach, Fl. Joan Wesley of Port St. Lucie, Fl. Special friends Natalie Stephens and Debrielle Burrell of Newnan, Ga. And a host of other sorrowing cousins, friends and Christian brothers and sisters. Norma was preceded in death by her grandparents Grover and Irene Cheatham, uncles Walter Cheatham and Alphonso Murray, aunt Marian Lane and her father Norman Cheatham. Norma's family is grateful for all the condolences from different parts of the country. We all look forward to the fulfillment of the promise made at Isaiah 33:24 that tells us one day no one will say "I am sick."

The family of Norma Patrice Slaton created this Life Tributes page to make it easy to share your memories.

Send flowers to the Slaton family.