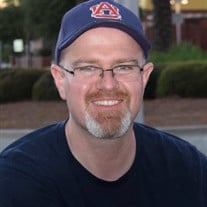 Patrick D. Price, 47, passed away peacefully on Sunday, August 30, 2020 at his home in Sharpsburg after a 2 1/2 year battle with kidney cancer. He was born on March 15, 1973 in Opelika, AL to Dennis and Sherrill (Houston) Price. Patrick is survived by his wife, Sheri; his daughters, Kayla and Brianna; his parents; as well as many aunts, uncles, and cousins. He was preceded in death by his grandparents Katie Houston, Calvin Houston, Myrtice Price, and Kermit Price. Patrick graduated from Benjamin Russell High School in 1991 and went on to earn his Bachelor of Science degree in Pharmacy from Auburn University in 1996. He worked as a Pharmacist at Kroger from 1996 until 2006. He began working as a Pharmacist at Piedmont Newnan Hospital in 2006 and continued his career there until he passed away. Patrick adored his two girls and loved spending time entertaining them. He loved listening to music, dancing, and all things food, especially cooking. He enjoyed spending time with his family and friends and always kept everyone laughing. One of his greatest loves was the beach, especially St. George Island in FL, where he and his wife were married in 2011. A memorial service will be held on September 19, 2020 at 2pm at McKoon Funeral Home located at 38 Jackson Street in Newnan, GA 30263. Guests are invited back to the family's house following the service. If desired, memorial donations may be made in Patrick's name to one of the following, Kidney Cancer Research Alliance (KCCure), Sacred Journey Hospice in Georgia. Condolences may be expressed to the family online at www.mckoon.com. "God saw you getting tired, when a cure was not to be. He wrapped his arms around you, and whispered 'Come to Me'. You didn't deserve what you went through so He gave you needed rest. God's garden must be Beautiful, He only takes the best." -Frances & Kathleen Coelho

Patrick D. Price, 47, passed away peacefully on Sunday, August 30, 2020 at his home in Sharpsburg after a 2 1/2 year battle with kidney cancer. He was born on March 15, 1973 in Opelika, AL to Dennis and Sherrill (Houston) Price. Patrick is... View Obituary & Service Information

The family of Patrick Dennis Price created this Life Tributes page to make it easy to share your memories.

Send flowers to the Price family.