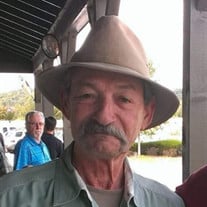 Patrick "Pat" Theodore Schippert, Sr was born on Friday, February 29, 1952 in San Bernardino, CA to Mary Gene (Wolfe) Cunningham and Frederick Henry Schippert. Pat passed away unexpectedly on Friday, March 4, 2022 at the age of 70. Pat spent the majority of his childhood in the Orlando, FL area. Pat entered the U.S. Army October 24, 1969 and was trained as an aircraft mechanic. In January 1972 he was deployed to Vietnam and served primarily in the Ninh Hoa region as a door gunner with the 60th Aviation Company as part of the Ghost Riders combat helicopter unit. Upon completion of his military duty he briefly attended college prior to being hired as an aviation mechanic. As a part of his aviation career he was a contract aviation mechanic for U.S. Customs Service and had many "adventures" during that employment. Pat also served as a police officer in Jacksonville, FL. In January 2008 he was recruited by the Federal Aviation Administration for a position as Aircraft Maintenance Inspector. Pat was a part of the FAA until his retirement in 05/2014. Pat loved riding his motorcycle until chronic back issues forced him to park his beloved bike. However, he was able to enjoy boating and loved spending time on his cruiser at Lake Allatoona. He also had a love of guns and enjoyed both collecting and target shooting. Pat loved classic rock and dancing. On 05/29/1997 Pat married Kerry Kim (McKenzie) Schippert. They shared a blended family of four children. Pat is survived by two sons, Roddy Daryl Bishop (Huntsville, AL) and Patrick Schippert, Jr.(Orlando, FL) and daughter Mary Ann Holt (Douglasville, GA) and his step-daughter, Tara Nicole Parry (Helena, MT). He also is survived by grandchildren Brianna Holt Smith, Samuel Bishop, Benjamin Bishop, Colton Parry and McKenzie Parry, daughter-in-law Kristi Bishop and son-in-law's John Parry and John Holt. Pat was one of five brothers. Gerald Benjamin Schippert, William Dennis Schippert and Frederick Henry Jr. preceded Pat in death. He is survived by brother Karl "Rick" Schippert. Pat was truly one of a kind and a true "character". He was known for his mustache and Panama Jack hat. He was always outspoken and all new exactly what he was thinking at any time. Pat was a beloved husband to Kerry and they would have celebrated their 25th wedding anniversary this year. The funeral service will be held on Friday, March 11, 2022, at 12:00 PM in the chapel of McKoon Funeral Home with Rev. Don Daly officiating. Interment will follow at Forest Lawn Memorial Park. The family will receive friends from 11:00 AM until service time. Condolences may be expressed online at www.mckoon.com McKoon Funeral Home & Crematory (770) 253-4580

The family of Patrick T. Schippert, Sr. created this Life Tributes page to make it easy to share your memories.