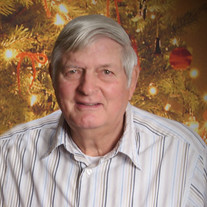 It is with great sadness that we announce the passing of Paul Eversole (86), a beloved husband, father, and papa. He passed away peacefully at his home in Sharpsburg, GA on June 22, 2021 after a courageous four year battle with colon, liver, and lung cancers. Paul was born on February 2, 1935 in Hazard, KY to Joe and Ethel Eversole. He grew up with his nine brothers and sisters in Hazard and was the valedictorian of his graduating high school class. He joined the Air Force at nineteen, once his older brother returned, and was stationed in Ohio and Utah. Following the Air Force, Paul worked for ARINC (Aeronautical Radio, Inc) in air and sea rescue which gave him the opportunity of living in a variety of places such as Honolulu, Hawaii, Anchorage, Alaska, and Okinawa, Japan. After all the traveling, Paul got a job as a radio operator with Delta and moved to an apartment in East Point, Georgia. He soon met a neighbor, Rosemary Bates, and they soon began a serious relationship. On December 28, 1968 the couple were married. Rosemary was a library media specialist at The Meadows Elementary School in College Park and they soon found a home in Riverdale. They enjoyed traveling and Paul, also being a professional photographer, always took every opportunity to photograph their adventures. Paul moved into other careers throughout his life including moving to dispatch at College Park and Peachtree City Police Departments and working with computer entry at Lep-Profit Freight Systems in East Point. Paul and Rosemary had one child, Paula, who was born in 1979. Paula got married to Aaron, her high school sweetheart, and in a few years Rosemary and Paul were blessed with two grand babies whom they enjoyed spending time with every minute they could. Paul's favorite past times were taking care of his enormous lawn and spending time with his grandkids. When he wasn't doing these, he could often be found relaxing in his recliner and watching his favorite shows like The Andy Griffith Show, Flintstones, and Murder She Wrote. Paul is survived by his daughter, Paula, and son-in-law, Aaron, his two grandchildren, Landon (16) and Adalyn (10), his sisters Lorene and Juanita and his brothers Eugene, Earl Wayne, and David, along with nieces, nephews, and cousins. Graveside services will be held Wednesday, July 14, 2021 at 10:00 AM at Sharpsburg Baptist Church Cemetery with Deacon Jonathan Tinney officiating. In lieu of flowers, please consider donating to CTCA https://www.cancercenter.com/community/giving-back in Newnan, whose doctors and nurses took great care of Paul during his battle with cancer and afforded him more time with his family. Condolences may be expressed to the family at www.mckoon.com. McKoon Funeral Home & Crematory (770) 253-4580.

It is with great sadness that we announce the passing of Paul Eversole (86), a beloved husband, father, and papa. He passed away peacefully at his home in Sharpsburg, GA on June 22, 2021 after a courageous four year battle with colon, liver,... View Obituary & Service Information

The family of Paul Eversole created this Life Tributes page to make it easy to share your memories.

It is with great sadness that we announce the passing of Paul...

Send flowers to the Eversole family.