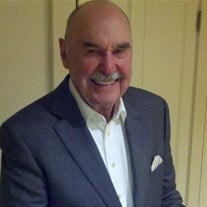 Raymond Emmet Curtis, a longtime resident of New Orleans who was born on October 23, 1932, in Seguin, Texas, died on February 11, 2022, in Newnan, Georgia, where he had been living since September 2021. He was 89 years old. Ray Curtis is... View Obituary & Service Information

The family of Raymond Emmet Curtis created this Life Tributes page to make it easy to share your memories.

Raymond Emmet Curtis, a longtime resident of New Orleans who...

Send flowers to the Curtis family.