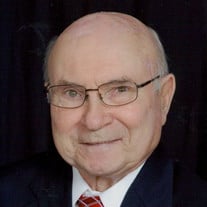 Raymond Dupree Petty, Sr., age 90, of Newnan, Georgia passed away peacefully on March 5, 2022, at home after an extended illness. Ray was born on March 16, 1931, to Louis Lamar Petty, Sr. and Willie Brown Carswell Petty of Irwinton, Georgia. He graduated from Irwinton High School in June 1950. Ray attended Emory University at Oxford and graduated from Emory University with a Bachelor of Arts in June 1952. In May,1971, he graduated with a master's degree in business administration from Georgia State University. On July 25, 1951, Ray married his high school sweetheart, Gerrie Dent. Ray served in the U.S. Army and was stationed at Fort Jackson, South Carolina from 1952 to 1954. He worked in Columbus, Georgia for the State from 1954 to 1956. He moved to Newnan, Georgia in 1957 where he worked as Industrial Relations Manager for the William L. Bonnell Company (Tredegar) until his retirement in 1990. After retirement, Ray remained very active. He conducted training seminars for companies in the area and taught college classes at West Georgia College in Carrollton, Georgia. Ray was a faithful servant of the Lord. He was a member of the Newnan First United Methodist Church. He taught Sunday School classes for over 35 years. He served almost every committee in the church. Ray had a beautiful singing voice. He sang in the Chancel Choir and was a member of the Swinging Singing Seniors. Ray was an active member of the community. He was a member of the Elks Club, the Civitan Club, and the Masonic Lodge of Georgia. One of his passions was supporting Newnan High School athletics. He was the Newnan Athletic Booster Club President in 1973. In 1974 Coach Bass made him an honorary member of the Newnan High School coaching staff because of outstanding loyalty and service. Holmes Cunningham, former Newnan High School Principal, and Ray attended every Newnan football and baseball game possible. They traveled to out-of-town games, got lost many times, but always made it home with stories to tell. Ray was preceded in death by his father, Louis Lamar Sr., his mother Willie Brown (Bill), his sister, Carolyn (Sis) , and his brother, Louis Lamar, Jr. Ray is survived by his wife, Gerrie, his daughter, Sandra McCormick and her husband John, his son, Dupree, and his wife Marsha, his grandson Mason and his wife Stacey, his grandson Justin and his wife Alyssa and their children Joy Kate and Wells, and his granddaughter Jaclyn and her husband Patrick and their son Levi. Visitation is at 10:00 AM on Wednesday, March 9, 2022, at Mckoon Funeral Home and the funeral service will follow in the chapel at 11:00 AM. A private burial service for the family will take place at Forest Lawn Cemetery in Newnan. Condolences may be expressed to the family at www.mckoon.com In lieu of flowers, the family asks that donations be made to Sacred Journey Hospice 60 Oak Hill Blvd Ste 203, Newnan, GA 30265 or Newnan First Methodist Church33 Greenville St S, Newnan, GA 30263 in memory of Raymond Dupree Petty, Sr. McKoon Funeral Home & Crematory (770) 253-4580.

The family of Raymond Dupree Petty, Sr. created this Life Tributes page to make it easy to share your memories.