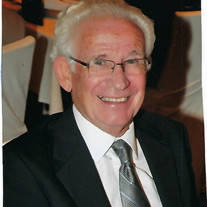 Richard F. Daras, 86, of Newnan, GA passed away on January 27, 2021 at the Corinth Road Personal Care Home after a long illness. He was born in Yeadon, PA on September 13, 1934, son of the late Alphonse and Grace Daras. He is survived by his second wife Sandra Alexander Cenkner Daras, and his two sons, Kirby and Geoff Daras and their spouses, children, and grandchildren. He is also survived by his brother Kenneth, two sister-in-laws and numerous nieces and nephews. He is preceded in death by his first wife Jane Kirby Daras to whom he was married to for 52 years., sister Marilyn Daras DiGiacomo, and brother Robert Daras. Richard graduated from West Catholic High School, Philadelphia, PA in 1952. After working in a variety of jobs right after high school, he was drafted into the United States Army in 1957. He would go on to serve as a radio engineer for the Armed Forces Network in Frankfurt, Germany until his discharge in 1959. Following his return to the US, he got a job with the Dupont Company in November 1959 working with printing plates and other related products that would support countless newspapers, magazines, and other publications across the country. He moved his family to Willingboro, NJ in the late summer of 1959, and once his sons were old enough started a nearly lifelong involvement with youth sports. That involvement included coaching, officiating, establishing, and operating youth teams and leagues in baseball, basketball, and soccer. Most notably, he coached an under 14 traveling soccer team that won a New Jersey state championship in 1973. After being transferred by Dupont and moving to Delaware, he founded the Kirkwood Soccer Club in New Castle County which still operates today. Thousands of kids and their families have learned and grown into the game that has allowed some to attend college on scholarship and others to eventually play at the professional level. He continued to referee youth soccer into his 60’s. He was a lifelong fan of the Philadelphia Phillies, Eagles, Flyers, and Seventy Sixers and was especially elated when the Eagles won their first Super Bowl in February 2018. A visitation and rosary will be held from 5:00 PM until 7:00 PM on Friday, February 12, at the McKoon Funeral Home, 38 Jackson St., Newnan, GA. The following day, Saturday, February 13 beginning at 11:00 AM, a funeral mass will be celebrated at St. George Catholic Church, 771 Roscoe Road, Newnan GA. In lieu of flowers, the family asks that memorial contributions be made in Richard’s name to St. George Catholic Church, 771 Roscoe Road, Newnan, GA 30263. Condolences may be expressed to the family online at www.mckoon.com. McKoon Funeral Home & Crematory 770-253-4580

Richard F. Daras, 86, of Newnan, GA passed away on January 27, 2021 at the Corinth Road Personal Care Home after a long illness. He was born in Yeadon, PA on September 13, 1934, son of the late Alphonse and Grace Daras. He is survived by... View Obituary & Service Information

The family of Richard Daras created this Life Tributes page to make it easy to share your memories.

Send flowers to the Daras family.