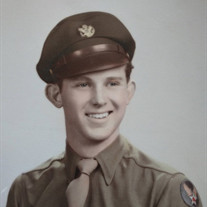 Richard Cannon James, Sr died Tuesday, December 8th at Insignia of Newnan. He was born in Charlotte, NC on November 3rd, 1926 to Hazel Walter (Jim) and Margaret James. He married Sara Faye Osborn on July 24, 1948. An only child, Richard (Dick) moved around the southeast frequently with his parents as his father, Jim, moved to different job sites for The Grinnell Company. They moved so frequently in fact, that our dad used to share the story that he came home from school one day to a completely empty house. His parents had moved again and forgotten to tell him. Dick attended Boys High, Atlanta, GA where he served as president of the student council and played trumpet in the school band. Upon graduation from Boys High, Dick joined the Army Air Corps reporting to Ft McPherson. He was deployed to Parnamirim Field, Natal, Brazil which was established to counter a possible invasion from axis forces in North Africa. While stationed in Natal, Dick cobbled together a 10 piece swing band to pass the time. The band ended up becoming quite good and played regularly at the officers club. After his honorable discharge from the army, Dick graduated from the University of Georgia with a BBA in Industrial Relations/Personnel Administration. About this time Dick met Sara Osborn in Sunday School at Druid Hills Presbyterian Church in Atlanta, GA. They married, had three children, Richard Jr, Jennie and Walter and settled in Atlanta, GA. During this time Dick worked his way through the ranks of Martin E Segal Co as an employee benefits consultant eventually serving as Vice President of the Atlanta office. This was about the time Sara, a country girl having grown up in Sparta, GA, wanted to move from the city to Newnan. Dick and Sara moved to Newnan and joined Newnan Presbyterian Church in 1976 and Dick remained a member until his passing. Sara, his wife and best friend for 54 years, passed away in 2002, a loss our father was never able to fully recover from. Newnan Presbyterian Church became our dad’s new home and family where he devoted most of his time. He served as an elder at the church in charge of the senior adult ministry. Dick was part of HeBrews (the coffee guys) on Sunday mornings, responsible for making coffee and setting out donuts for the congregants which he continued to do until it was physically too difficult for him to attend church. Richard Cannon James, Sr passed away peacefully on a beautiful sunlit day, Wednesday December 8th 2020 having led a wonderful life as a loving son, husband and father. We are so thankful that we were blessed by God to be a part of his life and that a piece of him may live on through us. We would like to take this opportunity to thank Dick’s extended family at Newnan Presbyterian Church. They truly were the one part of his life that gave his life meaning and hope of something bigger than himself. They always checked on him during his days at Insignia, bringing him treats, cards and pictures that the children drew at church to lift his spirits. We are grateful for the tender care that Insignia of Newnan gave our dad. The staff at Insignia and Affinis Hospice were so kind and loving during Dick’s residence there and we can’t thank you enough for loving him as we did. The family will receive friends Friday, December 11, 2020 from 5:00 PM until 7:00 PM at McKoon Funeral Home, 38 Jackson Street, in Newnan. Condolences may be expressed to the family online at www.mckoon.com. Surviving are daughter Jennie Sellen, and son, Walter James. Surviving grandchildren are Michael James of Stuart, FL, Danielle Dunn of Dalton, GA, Tiffany Laird of Dalton, GA, Ashley Rauers of Austin TX, Donovan James at Ft. Benning, Beck James of Newnan, Sara James of Newnan and Owen James of Newnan, Richard’s wife Sara and one son Richard Jr preceded him in death. “He will wipe every tear from their eyes. There will be no more death or mourning or crying or pain, for the old order of things has passed away.” Rev 21:4

The family of Richard Cannon James created this Life Tributes page to make it easy to share your memories.

Send flowers to the James family.