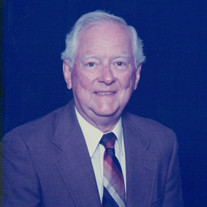 Wylie slipped from his earthly life August 23, 2020 to his heavenly Father. Robert Wylie Parden, Jr., born March 13, 1929 in Atlanta, GA to the late Dora Ready King and Robert Wylie Parden, Sr. Wylie grew up in Oakland City and attended Boy’s High School. He worked at different jobs until he went to work with Delta Airlines. He was with Delta for 38 years. He enjoyed his work at Delta and made many friends. He enjoyed basketball and followed Georgia Tech. He attended all the games at Georgia Tech and followed the team in the play offs as long as he was able. His other love was Golf. He played in Men’s Delta Golf tournaments for many years. He is survived by his loving wife, Elizabeth “Libba” Boles Parden; his five children, Jane Hanes and husband Steve, Russell Parden, David and wife Suzanne, Sam Parden, Jack and wife Cheryl; stepchildren, Sharon Sharpe and husband Warren, Carol Martin and husband Edward, John Boles and wife Kelly. Along with his parents, he is preceded in death by his stepson Walter E. Boles, Jr. and stepdaughter Karen Fikes. He was loved by a large family. He and Libba had a combined family of 10 children, 28 grandchildren and 20 great grandchildren. He was a member of Cornerstone United Methodist Church and the Seekers Sunday School Class. He loved attending church and Sunday school class. All the Seekers class loved him and he them. The funeral service celebrating Wylie’s life is Wednesday, August 26, 2020 at 11:00 AM at Cornerstone United Methodist Church, 2956 Sharpsburg McCullum Road, in Newnan with Dr. Scott Pickering officiating. The family will receive friends on Wednesday from 10:00 AM until service time at the church. Burial will follow the service at Peachtree Memorial Park in Norcross, GA. Serving as pallbearers will be Josh Britt, Zackery Parden, Scott Martin, Justin Martin, Ryan Boles and Jake Boles. In lieu of flowers the family asks the memorial contributions to be made in Wylie’s name to either of his two favorite charities, Boy’s Town or St. Jude. Condolences may be expressed to the family online at www.mckoon.com. McKoon Funeral Home & Crematory 770-253-4580

The family of Robert Wylie Parden created this Life Tributes page to make it easy to share your memories.

Wylie slipped from his earthly life August 23, 2020 to his heavenly...

Send flowers to the Parden family.