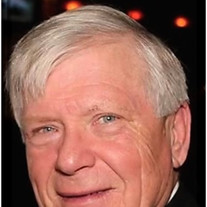 It is with deep sadness that we announce the passing of our beloved husband and father. Rodney (Rod) Dean Shough, 67, formerly of Adrian, MI passed away peacefully at his home in Newnan, GA on Friday, March 5, 2021. Rod was born in Adrian, MI on July 10, 1953 as the son of Mr. Howard R. Shough and Mrs. Gwylla B. Claypool. He was raised in Adrian with his sister and parents to a regional farming family. While attending Adrian High School, he met his future wife Jean Bailey through mutual friends. After graduating Michigan State, he would serve as a Sheriff in Lenawee Country. He continued his graduate studies at Michigan State receiving his Masters in Labor Relations. He hired on with the Trane Company in 1981 at Salt Lake City, Utah later moving to the Clarksville, TN plant in 1984. There he spent time in progressive roles while raising his family and serving in many philanthropic and community programs. His career took him to Tyler, TX in 1993 to the Trane Residential HQ where he would remain until leaving Trane after 23 years. Considering retirement, he elected to continue working and moved to Newnan, GA with the Porex Corporation where he would retire in 2020. Rod always left an incredible mark on all those who met him. He had the unique capability of turning on/off with his wit and charm to match the situation. A family man first and fiercely loyal friend to end. Regularly taking his entire family on vacations to sunny locations, he would facetime all his grandchildren when they couldn’t be with there with him. Rod loved playing golf and socializing with his fellow Arbor Springs neighbors. Along with Jeanne, they enjoyed purchasing and operating their FL properties making even more relationships and housing friends. Rod leaves behind his beloved wife, Jean Bailey Shough, his sister Cheryl Shough McKeown, his sons Chris (Kelly) Shough and Jerrod (Carrie) Shough, his grandchildren Bodie Shough (6 mos), Finnegan Shough (2), James Shough (6), Carlie Davis (15), and Daphne Davis (17). Per his wishes, a celebration of life will be scheduled at a later time and date where everyone may be able to attend. In lieu of flowers, please consider donating to your local athletic or academic programs in his name. Condolences may be expressed to the family online at www.mckoon.com. McKoon Funeral Home & Crematory 770-253-4580

It is with deep sadness that we announce the passing of our beloved husband and father. Rodney (Rod) Dean Shough, 67, formerly of Adrian, MI passed away peacefully at his home in Newnan, GA on Friday, March 5, 2021. Rod was born in Adrian,... View Obituary & Service Information

The family of Rodney Dean Shough created this Life Tributes page to make it easy to share your memories.

It is with deep sadness that we announce the passing of our beloved...

Send flowers to the Shough family.