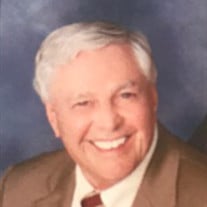 Rodney Veeley VanPatten was born in Opelika, Alabama, on September 22, 1942, the son of Belle and Wilton Veeley (Bill) VanPatten. He moved with his parents to Newnan in the late 1950s and graduated from Newnan High in 1960. Rodney attended the University of Georgia, where he was a member of Kappa Alpha Order, and graduated from Georgia State University. On December 29, 1964, he married Nan Shell VanPatten, also of Newnan, at First Baptist Church. After they married, they moved to Atlanta, where they lived for 35 years. Rodney began his career at Georgia Power and Southern Company and then became self-employed, working with Central Electric in South Carolina for over twenty-five years. Nan and Rodney moved back to Newnan in the early 2000s. Rodney was a life-long fan of golf, working to perfect his game on the Newnan Country Club course whenever he had a free morning or afternoon. His friends and family remember his love of the game and dedication to finding his swing. Rodney is survived by his wife of 56 years, Nan, along with their daughter, Seay VanPatten Poulakos (and husband Jim Poulakos) and granddaughters, Mary Patten and Rees of Newnan; son, Vee VanPatten (and wife Emmie VanPatten) of Newnan; brother-in-law, Rhodes Shell of Newnan; niece, Blake Shell of Portland, Oregon; and niece, Katherine Shell (and husband Billy Hughes) of Washington, DC. In lieu of flowers, contributions can be made to Central Baptist Church, 14 West Broad Street, Newnan, Georgia 30263 or simply text CBCGIVES to 73256 and follow the instructions. Family and friends will be gathering graveside at Oak Hill Cemetery on Sunday, March 7th at 2 pm. All are welcome, but given the unusual times, the family understands those who will be remembering Rodney from afar. Online condolences may be expressed at www.mckoon.com. McKoon Funeral Home and Crematory 770-253-4580.

Rodney Veeley VanPatten was born in Opelika, Alabama, on September 22, 1942, the son of Belle and Wilton Veeley (Bill) VanPatten. He moved with his parents to Newnan in the late 1950s and graduated from Newnan High in 1960. Rodney attended... View Obituary & Service Information

The family of Rodney Veeley VanPatten created this Life Tributes page to make it easy to share your memories.

Rodney Veeley VanPatten was born in Opelika, Alabama, on September...

Send flowers to the VanPatten family.