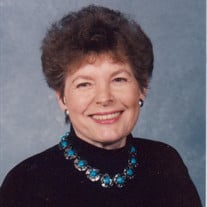 Sally Fiedler Drexler, 83, formerly of Tifton, GA, passed away July 13, 2020 at her home in Newnan, GA. She was born Nov 16, 1936 in Summit New Jersey, to the late LTC Arthur and Ida Fiedler. Her father and her husband were both career Army.... View Obituary & Service Information

The family of Sally Fiedler Drexler created this Life Tributes page to make it easy to share your memories.

Send flowers to the Drexler family.