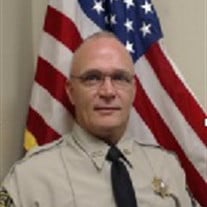 Scott Russell Carl, 49, of Newnan passed away unexpectedly on Sunday, March 14, 2021. Scott was born April 8, 1971 in Fairmont, WV to Dean Carl & Sonja Sturm Carl. Scott grew up in Mannington, WV where he graduated from North Marion High School. After graduation, Scott married his high school sweetheart, Renea, and joined the Military. He retired from the US Army after 21 years of service. His service in the Army took his family to many places around the world. Scott served many combat tours throughout his service. After retiring from the Army, Scott began a second career in law enforcement. He served with the Newnan Police Department for 8 years before joining the Coweta County Sheriff’s Office in January 2019. On March 8, 2021 Scott was promoted to Investigator with the Sheriff’s Office. He is survived by his wife of 31 years, Renea Hoy Carl, His two daughters Amanda (Kevin) Lites, Roni Lynn Carl and her significant other Bryson Dowler. Two Grandsons, Hunter and Trevor Lites and his mother and father-in-law, Deborah and Ronald Hoy, who he thought the world of. His Parents, several brothers and sister, and many close friends from his military and law enforcement careers. He was preceded in death by his Grandparents, Velma and Roy Carroll and his sister Barbara Lane. The funeral is Friday, March 19, 2021 at 11:00 a.m. graveside at Oak Hill Cemetery. The visitation is Thursday evening between 6:00-8:00 p.m. at McKoon Funeral Home, 38 Jackson Street, Newnan. Condolences can be expressed online at www.mckoon.com McKoon Funeral Home & Crematory (770) 253-4580

The family of Scott Russell Carl created this Life Tributes page to make it easy to share your memories.

Scott Russell Carl, 49, of Newnan passed away unexpectedly on...

Send flowers to the Carl family.