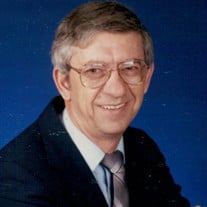 Reverend Searcy Jackson of Newnan, GA met his Lord on Friday, December 10, 2021. He was born the seventh child of the late Daniel Andrew Jackson, Sr. and Lola Belle Wright Jackson on December 27, 1932, in Carroll County, Georgia. He graduated from Temple High School in Temple GA. He served in the United States Air Force during the Korean Conflict. Searcy was stationed at Lackland Air Force Base in San Antonio, Texas. On August 25, 1951, Searcy married Nell Griffis from Villa Rica, GA. For the next 68 years, she was by his side in whatever endeavor he undertook. Searcy answered the Divine call from God to enter the ministry. Both he and Nell believed a call to preach was a call to prepare; thus, began their educational careers. Searcy graduated from Truett-McConnell College in Cleveland, GA; attended Mercer University, Macon GA; graduated from the University of Georgia, Athens, GA and studied at Southeastern Baptist Theological Seminary in Wake Forest NC. Nell worked during the day to enable Searcy to attend college and she attended night classes at Truett-McConnell College, Mercer University and The University of GA taking church related courses. In 1971 Searcy again answered a Divine call from God to enter the Bi-Vocational Ministry. For 32 years, he taught Vocational Education and Drafting and Design in the area where he served small churches as pastor. The last 6 years of his educational career he worked in the Facility and Maintenance Department as director. During this time, he served on a statewide committee that was responsible in forming a state wide facility organization known as the Georgia Association of School Facility Administrators better known as GASFA. He retired in 1995 from the Coweta County School and from the active pastorate. After retirement he has served churches as a transitional pastor and had served as Executive Director of the GASFA organization for until 2017. Rev. Jackson was preceded in death by his wife, Nell Jackson in 2019, his parents Daniel and Lola Jackson, his brother, Nathaniel Jackson and his wife Ezelle Jackson, Archie Jackson and his wife Edna Jackson, Stewart Jackson and his wife Lucy Jackson, Daniel Andrew Jackson Jr., his sister Videria Gray and her husband Lester Gray, sister Peggy Leopard and her husband Bill Leopard and a brother-in-law Ted Ragsdale. Surviving Searcy are his children, Danny Jackson and his wife Brenda of Leesburg GA; his daughter Jan Rivers and her husband David of Augusta, GA; Jeff Jackson and his partner Stan Pollard of Atlanta GA. His grandchildren are T. J. Jackson and his wife Amanda of Leesburg, GA, Heather Rivers of Augusta GA, Jackson Rivers and his wife Erica of Thomson, GA, and Zoe Margolin of Atlanta. His sisters are Ivee and Gene McGukin and Marie Ragsdale and sister-in-law Hellen Jackson all of Carrollton GA. There is a large extended family of nieces and nephews. During his 57 years of pastoring churches, he served First Baptist of Demorest GA, Seville Baptist of Seville GA, Blackshear Place in Gainesville GA, First Baptist of East Spencer, NC, Lystra Baptist, Chapel Hill NC, Antioch Baptist of Bowdon GA, Macedonia Baptist of Newnan GA, Providence Baptist of Rico GA and Newnan GA, and Union Baptist of Hogansville GA. Since his retirement from the field of education and from the active pastorate in 1995, he has served as Transitional Pastor at Macedonia, Mills Chapel, First Baptist of Moreland and Elim Baptist, all in Coweta County. While serving at Macedonia in 1996 -1997, he and his wife Nell formed the Young at Heart senior ministry group and continued to serve as directors as long as their health permitted. They found this group to be a great blessing in their life and felt the rewards of being a part of such a wonderful ministry. Searcy Jackson has been a loving and devoted husband, father and grandfather to all of his family and a very dedicated pastor to all of the churches he has served. He was a gifted wood craftsman and made many beautiful items for family and friends. A lifelong student of the Bible, Searcy's favorite passages have been John 3:16, Philippians 1:21, Psalms 23 and Proverbs 3:5-6. Funeral services will be conducted 1 p.m. Tuesday, December 14, 2021 at Macedonia Baptist Church, 1504 Macedonia Rd in Newnan. The body will lie in state at the church beginning at 12 Noon. Officiating at the service will be Dr. John Riley, Dr. Matthew Myers, Rev. Jackson Rivers and Bill McKenzie. Interment will be in Abilene Church Cemetery on Highway 113 in Carroll County Georgia. The family has requested that flowers kindly be omitted, and Reverend Jackson's life be honored by a memorial gift to Macedonia Baptist Church 1504 Macedonia Rd. Newnan GA 30263 or to Brightmoor Hospice 3247 Newnan Road Griffin GA 30223. Online condolences may be expressed at www.mckoon.com. McKoon Funeral Home and Crematory 38 Jackson St. Newnan GA 770-253-4580.

The family of Rev. Searcy Jackson created this Life Tributes page to make it easy to share your memories.