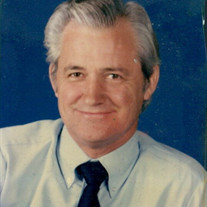 Mr. Stanley Jackson Yarbrough, 82, passed away Friday, September 17, 2021 at his home in Newnan. He was born August 27, 1939 in Newnan to the late Rufus Yarbrough & Belle Faver Yarbrough. In addition to his parents, he was preceded in death by six siblings. Stanley grew up in Newnan and was a graduate of Newnan High School. After high school, he enlisted in the Air Force where he honorably served during the Vietnam era. Stanley excelled during his military service earning the Airman of the Month for the entire Air Force. After his service to his country, he obtained his bachelor's and master's degrees. He went on to have a long, distinguished career as an Educator at Newnan High School where he made lasting relationships with his students and fellow teachers. In 1986 he was honored by Berry College, being nominated by a former student, as being a "favorite teacher." Stanley's love of softball led to him playing in Senior Softball leagues. He was a member of the team that won two AAA World Championships in which he had the highest batting average in the league. The visitation is Sunday, September 19, 2021 between 6:00-8:00 p.m. at McKoon Funeral Home, 38 Jackson St, Newnan. The private family graveside, with military honors, will be held. In lieu of flowers, memorial contributions may be made to the Newnan Coweta Humane Society, 608 Hwy 29 N, Newnan, GA 30263 or https://www.nchsrescue.org/donate Condolences may be expressed online at www.mckoon.com Survivors include wife, Linda Rainey Yarbrough; children, Phillip (Mary) Yarbrough, Phyllis (Dan) Gentry; grandchildren, Stanley Gentry, Phillip Yarbrough, Jr., Victor Pruett, Brian Gentry, Cassey Gentry McKoy; sisters, Novelle Dennis, Mary Shoemake; sisters-in-law, Jane Yarbrough, Margaret Yarbrough; great-grandchildren; numerous nieces and nephews. McKoon Funeral Home & Crematory (770) 253-4580

Mr. Stanley Jackson Yarbrough, 82, passed away Friday, September 17, 2021 at his home in Newnan. He was born August 27, 1939 in Newnan to the late Rufus Yarbrough & Belle Faver Yarbrough. In addition to his parents, he was preceded in death... View Obituary & Service Information

The family of Stanley Jackson Yarbrough created this Life Tributes page to make it easy to share your memories.

Send flowers to the Yarbrough family.