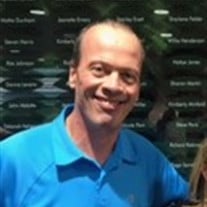 Mr. Stephen "Steve" Patrick Paris. 60 of Ocala FL, passed away peacefully on Wednesday, January 19, 2022 at the Cancer Treatment Center of America, in Newnan GA. He was born on July 24, 1961 in Manhattan, NY to Phyllis O'Donnell Paris and the late Patrick Paris. In addition to his father, he was preceded in death by his brother, Robert Paris. Survivors include his mother, Phyllis O'Donnell Paris, his sister, Catherine Paris, his nieces Kyra Pairs Keene, Melissa Paris and his nephew Robert Paris, Jr. Steve grew up in New York, later moved to Miami before establishing his final home in Ocala, FL. A natural born athlete, he was the captain of every team he joined and an avid golfer with a 4 handicap. Steve had a long career in real estate specializing in development projects and he owned several businesses over the years. He lived life to the fullest and did not let cancer define him. He arrived at CTCA over seven years ago with stage 4 pancreatic cancer. Instead of giving up, Steve thrived under the care he received. His faith was awakened thanks to the Pastoral staff and he formed very deep friendships with so many at CTCA. He was a strong advocate for CTCA and helped over 100 patients find their way through the doors to hope and healing. He was a strong Christian who loved to share his faith with others. A Celebration of Steve's life will be held on Sunday, January 23, 2022 at 4:00 o'clock at McKoon Funeral Home, 38 Jackson St. Newnan, GA. The funeral mass and burial will take place in Ocala, FL on Wednesday, January 26, 2022. Rather than flowers, the family requests memorial contributions to Cancer Treatment Center of America (CTCA Atlanta) 600 Celebrate Life Parkway, Newnan, GA 30265. Condolences can be expressed online at www.mckoon.com McKoon Funeral Home & Crematory (770) 253-4580

Mr. Stephen "Steve" Patrick Paris. 60 of Ocala FL, passed away peacefully on Wednesday, January 19, 2022 at the Cancer Treatment Center of America, in Newnan GA. He was born on July 24, 1961 in Manhattan, NY to Phyllis O'Donnell Paris and the... View Obituary & Service Information

The family of Stephen Patrick Paris created this Life Tributes page to make it easy to share your memories.

Send flowers to the Paris family.