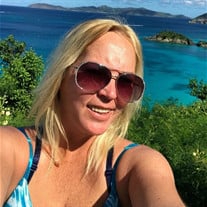 Tiffany Dani’el Cole, 40, of Grantville passed away Saturday, September 26, 2020 from injuries sustained in an accident. She was born December 3, 1979 in Miami, FL to Richard & Tracy Tiemersma Jackson. Her son, James Daniel Cole, Jr., preceded her in death. Tiffany was a true free spirit who loved life and made it a point to live life to the fullest. She was a loving mother that adored her children and grandchild. She treated each one as individuals and loved them all equally no matter their differences. She had a smile that would light up a room. She never met a stranger. Her hobbies included reading, antiquing, bowling, playing pool, going to the casinos, and being with her friends and family. Tiffany was a rare soul that treated everyone she met as family. Being raised in South Florida, Tiffany had a deep love for the ocean. Her fondest childhood memories were of her and her father fishing on canals and chasing lobsters in the reefs. Her favorite animal to this day is the sea turtle. After moving to Roanoke Alabama with her Grandmother, Tiffany was opened up to an entire new world. It was at this time that she met the father (Joey Hodges) of of her daughters Destiny and Isabella Hodges and fell in love. During that time of her life Tiffany proceeded to get her GED as well as a 2 year degree. She was a CNA for many years and took pride and joy in attending to her patients. It was in this time that she learned more of the country life. She enjoyed paint ball, four wheeling, and spending time on the riverbank of the Tallapoosa river. Where she enjoyed many summers with her “river rats” Destiny and Bella. Due to unfortunate circumstances Tiffany and Joey split up. During this time she struggled very hard making her own way in the world. In late October of 2010 Tiffany attended a birthday party. It was at this party that she met James Daniel Cole. The spark between the two of them was instant. It was only a few months later that Daniel along with his daughter Madison moved in with Tiffany and her river rats. The bond was magical, instantly. Tiffany took Madison in as if she was her own. Daniel traveled extensively due to work yet Tiffany was the type of woman that loved and cared for someone else’s child. During this time her soon to be sons Daniel Jr and Dale Cole started to visit. Tiffany married Daniel in November of 2011. This would prove to be the happiest time of Tiffany’s life. Over the next 9 years she shared so many adventures with her family. Things were not always perfect but for Tiffany, Daniel, and her 5 kids were the world. In 2016 Tiffany went on the road with Daniel. During this time she achieved greatness with her work. She buried herself into being the best assistant and employee she could be. She gained many memories and great friends during this time. Tiffany certainly had an appreciation for life. She was as happy on the banks of the Tallapoosa as she was on the beaches in St. Thomas. Her spirit fills us all today. The memorial service is Wednesday, September 30, 2020 at 2:00 PM in the chapel of McKoon Funeral Home with Rev. T.J. Boyd officiating. Rather than flowers, it was Tiffany’s wish that memorial contributions could be made to Trump 2020 https://www.donaldjtrump.com/ Condolences can be expressed online at www.mckoon.com Survivors include her husband, James Daniel Cole; parents, Richard & Tracy Jackson; children, Destiny Hodges, Bella Hodges, Madison Cole, Dale Cole; granddaughter, Aria “Little Turtle” Endicott. McKoon Funeral Home & Crematory (770) 253-4580

The family of Tiffany Dani'el Cole created this Life Tributes page to make it easy to share your memories.

Send flowers to the Cole family.