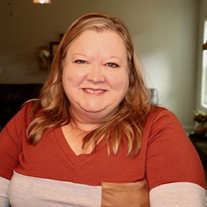 Victoria "Vicki" T. Beckley, age 54, passed away on Thursday, September 2, 2021 at Piedmont Newnan Hospital. She was born on June 13, 1967 to Victor "Butch" Tolbird and Marilyn Spikes Tolbird. Vicki was born and raised in West Monroe, Louisiana. She graduated from West Monroe High School in 1985. Vicki and Austin Beckley were married in 1986. They moved to Newnan, Georgia in 1993 and raised their two daughters. For 24 years, she was dedicated to advancing her career at Cooper Lighting. During her life, Vicki enjoyed doing many things: spending time with her family, shopping, making crafts, going on weekend trips to different places, and watching her favorite sport, Nascar. Victoria is preceded in death by her father, Victor "Butch" Tolbird. She is survived by her husband, Austin Beckley; mother, Marilyn S. Tolbird; children, Lindsey Mann and her husband Dustin Mann, Emily Howland and her husband Will Howland; granddaughter, Blair Mann and siblings, Chris Tolbird and Leigh-Ann Bielkiewicz. The memorial service celebrating Victoria's life is Tuesday, September 7, 2021 at 6:00 PM in the chapel of McKoon Funeral Home, 38 Jackson Street, in Newnan with Rev. Don Daly officiating. The family will receive friends on Tuesday from 5:00 PM until service time at the funeral home. Condolences may be expressed to the family online at www.mckoon.com. McKoon Funeral Home & Crematory 770-253-4580

The family of Victoria Lynn Beckley created this Life Tributes page to make it easy to share your memories.

Send flowers to the Beckley family.