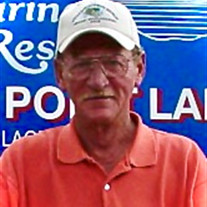 So many of the gospel hymns we have known all our lives talk of what a great day that will be when we have finished our course on earth and attain our highest reward. For William “Roger” Johnson, God fulfilled that promise in the early morning hours of November 2nd. As sure as he was present in this life for 73 years, he suddenly slipped into eternity, leaving behind a physical body that had begun to limit his activities. Roger was one of four children born to the late William Reuben and Lucy Myrle Adams Johnson. In addition to his parents, Roger was predeceased by his two brothers who died in separate tragic accidents and his sister, Joyce Johnson Morgan. Roger graduated from Riverside Military Academy and attended Georgia Southwestern State University. He served two years in the United States Army beginning in 1969 and was stationed in Germany. For all his life, Roger found his greatest joy in God’s great out of doors world. Fishing became a passion for him, and he never missed a chance to drown some worms! He also found that it was a wonderful way to bond with his sons and his grandchildren. Roger was the original founder of The West Georgia Bass Club. Along with that activity came the opportunity to mentor many young fishermen who were new to the sport or some older pros with whom he could share some stories. It comes as no surprise that Roger came to be known affectionately as “Bug Eye”. Those of you who know the sport, will understand. There is a well-known verse known as the Fisherman’s Prayer. The last line of that poem states “I then most humbly pray: when I’m in the Lord’s great landing net and peacefully asleep, that in His mercy I be judged, big enough to keep.“ Roger is survived by his wife, Jane Jackson Johnson. His sons are Ken Johnson and Greg Johnson and his wife Rholanda. His grandchildren are Kenny (and wife Catherine), Tanner, Carly and Emmy. Visitation for family and friends will be on Wednesday evening, November 4th between 6:00 PM and 8:00 PM. Rogers life will be remembered in a service of celebration to be held on Thursday, November 5, 2020 at 3:00 PM in the chapel of McKoon Funeral Home at 38 Jackson Street. The service will be led by Pastor Danny Wilson. The interment will follow at Historic Oak Hill Cemetery with appropriate military honors by The United States Army. Social distancing protocols are required for all events. In lieu of flowers, it is suggested that those who wish to do so , may make a memorial gift in Roger’s name to either The River Life organization , www.livetheriverlife.com or Unity Baptist Church www.ubcnewnan.com. Online condolences may be expressed at www.mckoon.com. McKoon Funeral Home 770-253-4580.

So many of the gospel hymns we have known all our lives talk of what a great day that will be when we have finished our course on earth and attain our highest reward. For William &#8220;Roger&#8221; Johnson, God fulfilled that promise in the... View Obituary & Service Information

The family of William Roger Johnson created this Life Tributes page to make it easy to share your memories.

So many of the gospel hymns we have known all our lives talk...

Send flowers to the Johnson family.