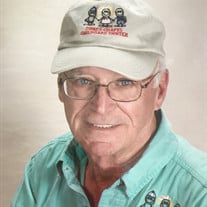 Bill Kennedy died Friday, February 26th at Piedmont Marcus Heart Center surrounded by his wife Susan, his favorite nurse Shelby Spain, the caring staff, and the love and prayers from friends, and family. Although he would prefer we all thought he was 45, Bill was born On December 29th, 1941 in Boston Massachusett. His love of cooking and feeding everyone he knew originated growing up with a large family including brother Frankie, parents Helena and Frank, his grandparents, aunts and uncles. Despite being an altar boy and his mother thinking he would become a priest, Bill joined the Navy in 1959. During his 20 years, he held many different titles but his favorite was as a radioman on submarines. During this time he married and had three children-Dana, Michele, and Bill. He took great pride in telling stories from their childhood and the fact that each had found their own paths and were loving, kind parents. Bill was fond of saying he woke up one morning in 1978 and realized he would like to see more of the ocean “above the water line”. After retiring from the Navy, he tried many different occupations but returned to the sea owning a freighter-the “Lady Dana”. Some of his fondest memories were of the years living in Eleuthera on a sailboat and delivering freight to the Bahamas, Hatti, and the surrounding islands. During this time, he remarried and had two children-Jessica and Ryan. He relished his time with them knowing they were finding their own way in the world and becoming individuals he would be proud of. In 1995 Bill moved to Fort Lauderdale, FLA where he divided his time between running his business and adventures with his wife and children. He remained in the shipping/ship brokering business until 2008 when he and his family moved one last time to Sharpsburg, GA. It was in Sharpsburg that Bill discovered a love of volunteer work, the joy of working with Cokes Chapel Childcare children, the true meaning of deep, lasting friendship through the men and their families in the “Old Goats”(including honorary member Vic Myers), the satisfaction of a job well done in helping to find the Grand Ole Opry a new home, and the immediate bond with the congregation at Turin UMC. Although he complained Georgia needed an ocean-or at least a decent canal-Bill truly cherished his life and friends and family in Georgia. Bill is survived by his wife Susan and her extended family,his children Dana Wison and her spouse Chip, Michele Ard and her spouse John, Bill Kennedy Jr. and his spouse Shannon, Jessica Kennedy and her spouse Maria Hope Winters, Ryan Kennedy, and eight grandchildren. Additionally, he leaves behind his dear friends Roberto Vazquez and his spouse Tim Copella and his beloved “Old Goats”. A family and friends service honoring Bill will occur at a later date. In lieu of flowers, the family asks that memorial contributions be made in his name at Meals on Wheels Coweta, County PO Box 73437, Newnan GA 30271, or Mission I-58, 2450 GA-85, Senoia, GA 30276. McKoon Funeral Home & Crematory 770-253-4580

Bill Kennedy died Friday, February 26th at Piedmont Marcus Heart Center surrounded by his wife Susan, his favorite nurse Shelby Spain, the caring staff, and the love and prayers from friends, and family. Although he would prefer we all... View Obituary & Service Information

The family of William Francis Kennedy created this Life Tributes page to make it easy to share your memories.

Send flowers to the Kennedy family.