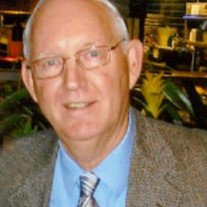 Willis Milton Stallings, 81, of Newnan, Georgia passed away on Tuesday, February 22, 2022, at Grady Memorial Hospital in Atlanta, Georgia. He was born January 15, 1941, in Newnan to the Late Willis Hammond and Elma Jackson Stallings. He was a graduate of Newnan High School (Class of 1959) and Southern Technical Institute (Class of 1968). He worked in the construction field for 50 years, retiring from Ronny D. Jones Enterprises in Newnan. He was a man of many talents: carpenter, architect, project manager, construction estimator, musician, computer programmer, photographer, genealogist, volunteer firefighter, historian, fisherman, pilot, sailor, craftsman, builder, writer, and friend. He enjoyed spending time at his mountain cabin, where he could reflect on Psalm 46:10: "Be still and know that I am God." More than anything, he wanted to be remembered as a family man. The titles he valued most were son, grandson, brother, nephew, cousin, uncle, husband, daddy, and poppy. Last May, he achieved his longtime dream of putting all of his grandchildren through college. He was a man of patience, generosity, integrity, strength, intelligence, wisdom, and Christian character - a true southern gentleman. He was a faithful husband, loving father, and devoted grandfather. He was a member of Tri- County Baptist Church in Senoia, GA. He truly was, and will continue to be, a blessing to us all. "The righteous perish, and no one takes it to heart; the devout are taken away and no one understands that the righteous are taken away to be spared from evil. Those who walk uprightly enter into peace; they find rest as they lie in death." (Isaiah 57:1-2) Survivors include his wife of 61 years, Judith Griffith Stallings of Newnan; daughter, Janet Hope of Fitzgerald, GA; daughter and son-in-law, Phyllis and Matthew Isennock of Newnan; grandchildren, Hannah Isennock of Newnan, Christopher and Shannon Isennock of Memphis, TN, Daniel Willis Hope of Savannah, GA; sister, Sarah Stallings Owen of Cullman AL; as well as many nieces, nephews, and cousins. In addition to his parents, he was preceded in death by his sister, Jean Nix, and his son-in-law, Lynn Hope. The service will be on Saturday, March 5, 2022, at 2:00 PM in the chapel of McKoon Funeral Home with Pastor Doug Anderson, Rev. Matthew Isennock and Rev. Ron Whitlock officiating. Interment will follow at Forest Lawn Memorial Park. The family will receive friends from 1:00 PM until service time. Condolences may be expressed online at www.mckoon.com McKoon Funeral Home & Crematory (770) 253-4580

Willis Milton Stallings, 81, of Newnan, Georgia passed away on Tuesday, February 22, 2022, at Grady Memorial Hospital in Atlanta, Georgia. He was born January 15, 1941, in Newnan to the Late Willis Hammond and Elma Jackson Stallings. He was... View Obituary & Service Information

The family of Willis Milton Stallings created this Life Tributes page to make it easy to share your memories.

Willis Milton Stallings, 81, of Newnan, Georgia passed away on...

Send flowers to the Stallings family.