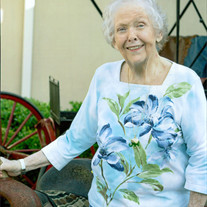 Mrs. Wilma Jean Kite East, 85, of Newnan, GA passed away peacefully at Southwest Christian Hospice on June 28, 2021. Wilma was a resident of Newnan since 2017 when she moved here from Panama City Beach, Florida with her late husband, Jesse Hoke East, to be closer to family. She was born in Atlanta, GA on September 4, 1935 to the late William Earl Kite and Clara May Fields. Wilma grew up with her three siblings in College Park, GA. She was a kind and caring person that never met a stranger. If you gave her the chance she would know your life story by the time the conversation was over. Wilma is survived by her daughter Lisa Clair Taylor and son-in-law Bobby Taylor of Newnan, brother James Kite and sister-in-law Sarah Kite of Douglasville, grandson Jason Taylor and wife Courtney Taylor of Sharpsburg, granddaughter Amber Taylor Spradlin of Newnan. Other survivors include her 3 step children Aubrey (Joy) East of Jonesboro, Donna East of Griffin, and Bobby East of Sugar Hill. She was also blessed with several nieces, nephews, and cousins. The Memorial Service for Wilma will be held at McKoon Funeral Home in Newnan, GA on Thursday, July 1, 2021 at 11:00 a.m. The family will greet friends at the funeral home prior to the service at 10:00 a.m.. In lieu of flowers, donations may be made in Memory of Wilma Jean Kite East, to Southwest Christian Hospice who took wonderful care of her in her final days. To donate visit www.swchristiancare.org or send directly through the mail to 7225 Lester Road, Union City, GA 30291. They are a non-profit hospice that runs on donations alone and they do not charge families for the care they provide. Condolences may be expressed to the family at www.mckoon.com McKoon Funeral Home & Crematory (770) 253-4580.

Mrs. Wilma Jean Kite East, 85, of Newnan, GA passed away peacefully at Southwest Christian Hospice on June 28, 2021. Wilma was a resident of Newnan since 2017 when she moved here from Panama City Beach, Florida with her late husband, Jesse Hoke... View Obituary & Service Information

The family of Wilma Jean Kite East created this Life Tributes page to make it easy to share your memories.

Send flowers to the East family.